After a recommendation last month by the Peekskill Paramount Committee, naming Red House Entertainment the preferred operator of the City of Peekskill-owned Paramount Center for the Arts (PCA), the Peekskill Common Council, a legislative body comprised of councilpersons and the mayor, made it official, in a decisive 6-to-0 vote last Monday night (March 11) by authorizing city management to begin exclusive lease negotiations with Red House, three of whose four members are Garrison residents. The City of Peekskill acquired the building in 1977 by virtue of a tax default. 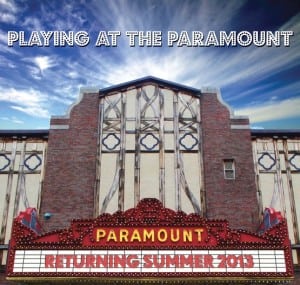 Red House had earlier been one of three contenders in seeking to revive the much-loved but fiscally ailing PCA, which has been shuttered since October 2012. The PCA had formerly been run as a nonprofit corporation, which was dissolved in order to “clear the way for a new entity to manage and operate the historic theater … and to responsibly address the organization’s liabilities and ultimately allow for the City to move forward on finding a new operator,” according to PCA’s website, which categorized the cessation of operations as “caused by an overall decline in the economy, a precipitous drop in private, government and grant donations and increased expenses, according to the filing.”

Red House will operate instead as a private/nonprofit hybrid, with revenues from the for-profit side funding some of the nonprofit programs, such as working with schools, anticipated. The other bids submitted were from the Tarrytown Music Hall, looking to operate a second theater, and the Paramount Phoenix Group, which was led by Antonio Ciacca, former director of Jazz at Lincoln Center.

The exact terms of the lease have not yet been made public, as some of the terms are still in the fine-tuning stage, with early April named as the hoped-for signed-sealed-delivered date and a projected summer start to live events returning to the 1,500-seat facility, built as a movie theater in 1930. Three of the principals of Red House live in Garrison, including Kurt Heitmann, an Emmy award-winning sound engineer who first formed Red House Pty. specifically in support of the bid submission. He pulled in a number of experts in specific fields to join him, including Garrison’s Ray Wilson, a music producer very experienced in tours, who will be in charge of concert production, the lining up of acts and artist development; and Jonathan Close, a licensing specialist, who will focus on marketing and branding.

Heitmann grew up in Peekskill and now “wants to give back to the community.” He told Philipstown.info that he has “a vision, and it is to make the Paramount what it once was, what all great vintage theaters once were: a focal point for a downtown community, a center for commerce, a place where people gather to be entertained. There are too many older and newer places with no identity, no character and no commerce.”

He, as well as Abigail Adams, a consultant to the group and managing director of the Hudson Valley Shakespeare Festival with over 25 years’ experience with nonprofits, emphasized the goal of making it a real partnership with the community. “A lot of people don’t know about Peekskill and how it is revitalizing,” said Adams. “All the proposals were strong. I think we just brought a different model. We weren’t exclusively a nonprofit, and we spread the risk out over more resources. We are super excited because it’s just an amazing opportunity — it’s so beautiful.”

Ray Wilson concurred. “Having lived in the area for some time, I knew that Peekskill was already home to a large number of quality artists and musicians. Through the hard work and dedication of many in those communities and with the help of a number of existing businesses, it is fast becoming a burgeoning music and entertainment center. That is what makes moving the Paramount forward so exciting.”

It is hoped that lease negotiations will be finalized with acting Peekskill City Manager Brian Havanek by early April, and at that time Red House will provide much more detailed plans relating to their planned programming and operations. Earlier reports have indicated a full slate including festivals, high-definition simulcasts, movie nights and rentals, alongside the music events. There’s even a new name in the works: Paramount Hudson Valley. Philipstown.info will report on this as confirmed information becomes available.