Food may be classified as a universal language in itself, but John Guerrero sees the culinary arts as an avenue to multilingual learning. The executive chef at Cold Spring’s Hudson House River Inn commences his daily routine with the age-old wisdom of immersion and communication. As a young teenager, Guerrero established a pattern of immersion in culinary challenges and not only learned his way around the kitchen but advanced his communication and language dexterity. 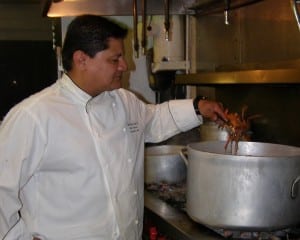 Though he was born in Ecuador, he moved to the United States as a preschooler and assimilated quickly in an English-speaking society. Now fluent in Spanish, he credits his many years working in commercial kitchens as critical to his language abilities.

Along his culinary journey, Guerrero also became proficient in Portuguese and fluent in Italian. He cherishes his years working it Italy as a foundation to his language learning and culinary training.

“It was my passion to learn the cuisine of Northern Italy,” Guerrero said. “I lived in Genoa and did a lot of classical cooking there. I also learned some French influence in Italy.  As time progresses, you learn different ways of cooking.”

Early mentors schooled him in the preparation of Italian cuisine found north of Rome, and Guerrero expanded his repertoire through decades of immersion in different cultures and cuisine. He has helped carve out a reputation for the Hudson House River Inn as a dining destination, and with 12 years invested in cooking in the Hudson Valley, the local chef has been at the historic property just along the Hudson for more than 10 years. Established in 1832, the Hudson House maintains an unassuming traditional setting with its formal dining room and casual tavern, but Guerrero lets his appreciation for international taste and contemporary dining flavor the menu. 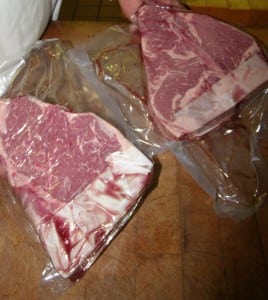 “As I’ve progressed here,” Guerrero said, “I’ve made it more into a bistro, and our reputation has grown in the quality products that we put out. You have to start with a good raw product, and you can give your customers quality.”

Among Hudson House signature offerings are quality steaks, dry-aged and delicately grilled to seal the beef flavor and juices.

“We use prime dry-aged handcut steaks,” Guerrero said. “There’s a difference in quality with dry-aged. With dry-aged, as the meat ages, you lose 1 percent per day. We don’t have a dry-age facility as it’s a very expensive process, but we order our steaks with our specific needs. We serve western beef from Colorado, and as people have tried it, they’ve learned this is a place where they can come for a tender and delicious steak.”

Guerrero endeavors to accommodate a range of appetites and dietary preferences, and his menu includes contemporary Asian selections, Northern Italian dishes, and a choice of market- fresh fish.

His sous chef Paul Mercer has worked at Guerrero’s side for the last six years, and when it comes to sauces and soups, Mercer keeps the kitchen prepped and stocked for high-volume service.

“I’m doing an asparagus soup that will be ready for tonight,” Mercer said as he tended a steaming stock pot. “It has to reduce and get happy. We’re also working on the stock for the lobster bisque.”

In addition to the lobster bisque, which is a Hudson House River Inn staple, Guerrero offers a sesame pan-seared sashimi tuna prepared to melt away with each taste. His fettuccine Bolognese and chicken Milanese also rank as house favorites, while leafy green salads made with fresh local fare command attention. 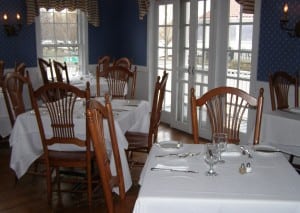 “We use local arugula, spinach, all the greens, as well as the baby carrots,” Guerrero said. “We sauté the carrots in a little butter and add a dash of maple honey.”

Desserts are also made onsite, and when they’re in season, Guerrero goes for fresh berries as a happy ending to his tender and sizzling steaks. Hudson House River Inn is participating in Hudson Valley Restaurant Week in progress now through March 24, offering prix fixe menus for lunch and dinner.

“We get really busy in the kitchen during restaurant week, but it’s motivating,” Guerrero said. “I love the vibe, and it moves on to others, to our whole staff.”