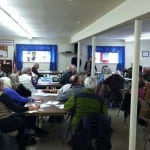 A meeting held last Saturday, March 16, by a nascent group called Senior Majority, led by Donna Anderson, focused its organizing message on the Butterfield development project because at least some seniors believe speedy approval of Paul Guillaro’s plans will translate into an important amenity for seniors in the Cold Spring and presumably the wider Philipstown community — namely a new senior center where hot meals at lunchtime and the camaraderie of others can be obtained.

What Anderson, Guillaro and others present found was that this specific agenda was not all that was on the minds of a diverse group of people who happen to be older. Seniors are no longer the reliable, homogenous demographic of perhaps a generation or more ago. Several people did speak about the urgency of approving Guillaro’s plans, and there was a discernable affirmation of that sentiment among the more than 100 attendees. But just as revelatory were the mix of views on the subject and the introduction of a several related and different issues beyond the need to create a senior center amidst a building project. And there was questioning of the Butterfield idea as well.

Among the issues raised were:

On Butterfield, Guillaro offered nothing new as he restated his mantra of complaint regarding the way the village conducts its business, the cost and time involved in the review process, his need for a show of support at public meetings and his requirement that village officials find a way to demonstrate a positive reaction to his plans before he files another plan for consideration. He has withdrawn his plans twice before decisions could be rendered.

Perhaps the starkest Guillaro comment came when Gretchen Dykstra asked him what he was prepared to contribute as the builder to a senior/community center. “A plain vanilla box,” was the reply. “I am looking to rent space to the county,” he added. Guillaro reiterated that in his initial discussions with officials in the county and village, willingness was expressed to fund services in one of his proposed buildings. But he made clear that people looking for answers on what if any services would accompany his development, they had to look to government, not him.

This is not a new position by Guillaro, but in this setting it underscored the position of many people, including some seniors that approval of the project ought to have some parallel acknowledgement of the services promised. Several people suggested to general accord that lobbying directly in Carmel is needed to press for the services.

Restaurant owner Tom Rolston was the loudest and most frequent voice in full support of the Guillaro project. It was he, notably not Guillaro, who tried to assure skeptics in the audience that even if county services did not come through, Guillaro would rent the space to a benign entity such as an accounting or law firm. He later argued the importance getting the buildings up before lobbying the county for services.

Most disruptive to the proceedings was Rolston’s attempt to inject the village election campaign and his own perspective that the village is being ruined by a small organized group “that are new here in the last five years,” into the discussion. He went on say that “a group of 20, 30, maybe 40 people email each other in a conspiracy to stop good things.”

As he started to tell people who to vote for in the March 19 election, several people interrupted him, declaring the meeting was supposed to be nonpartisan and that politicians had specifically been excluded. “OK, I won’t say who to vote for but you know who to vote for.” Rolston himself ran for trustee last year and lost badly in a three-way race to Chuck Hustis and Matt Francisco.

Another energetic voice in support in support of the Guillaro multi-use development was Joseph Immorlica, arguably one of the most knowledgeable people in the village on planning given his more than 30 years on the Planning Board.

He argued (and others agreed) that retaining the post office and creating a space to be used for both seniors and youths were sound reasons to support moving forward. (Dykstra, experienced in development issues, did observe at one point that the post office was an unreliable partner at best, given its precarious financial situation).

The main thrust of Immorlica’s point was that Butterfield would be approved eventually so why not hurry up the review process. Of all people, Immorlica knows the Planning Board can be cumbersome and time-consuming in its deliberations. When he served on the board, the Scenic Hudson proposal to create the West Point Foundry Preserve took upwards of four years and quite a bit of money on the part of the applicant. It can be fairly observed that he was a prime driver in insisting on additional reviews and changes to the plan and stating at times he wasn’t sure there was sufficient public support for the project. When the time finally came for a public hearing, only people in favor of it appeared to testify.

Anderson ran the meeting making sure all voices were heard and without much proselytizing for the Butterfield project or against political candidates or office holders not to her liking, as she did in an “exclusive” article in the Putnam County News and Recorder earlier in the week. She also said Butterfield was not the only issue her group would be addressing. “We are not going away,” she declared.