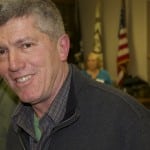 Bruce Campbell, an incumbent and veteran local vote-getter, and Stephanie Hawkins, a first-time challenger, were the victors in a three-way election for two Cold Spring Village trustee seats last night (Tuesday, March 19). Campbell won easily with 464 votes. Hawkins, a member of the Village Special Board for the Comprehensive Plan had more of a nailbiter, besting Cold Spring Fire Company President Michael Bowman by a 319 to 310 vote for the second seat.

Ralph Falloon won his expected victory for mayor with 459 votes against no opponent. There were 28 write-in ballots for mayor with an assortment of names offered.

“I feel good. I’m happy the village voters returned me to office. I am going to give them a good two years,” said Campbell. 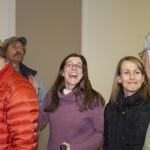 “I’m surprised and honored, said Hawkins, who added she was ready to get to work.

“I kept it honest and true,” said Bowman. “I am relieved it’s over. But I will be back,” he promised.

In Nelsonville, where both incumbent Mayor Tom Corless and Trustee Ande Merante ran unopposed, the makeup of the village government remained the same. Corless received 38 votes and Merante 37 out of a total 40 votes cast.