Tucked away on Dock Street at Garrison’s Landing is the headquarters of Ironbound Films, a documentary and media company that has been quietly crafting award-winning films and videos for nearly a decade. Ironbound’s most recent endeavor, a full-length documentary film titled Évocateur: The Morton Downey Jr. Movie, premiered last year at the Tribeca Film Festival and was picked up for distribution by Magnolia Pictures soon thereafter. The film is set to be released theatrically throughout the U.S. in late May.

“We’re excited about the prospect of [Évocateur] going to theaters around the country,” stated Jeremy Newberger, Ironbound chief executive officer. “Magnolia is a terrific company and it releases some great movies.” 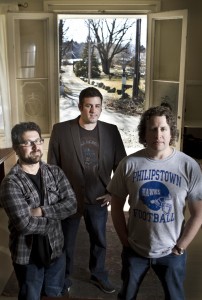 According to Newberger and Ironbound’s two other founders and principals Seth Kramer and Daniel Miller, Évocateur “ponders the life and times of the titular talk-show icon” Morton Downey Jr., the noisy, cigarette-smoking and sometimes physically abusive talk show host of the late 1980s.

Covert fans of Downey themselves, the three filmmakers decided they wanted to investigate the man and his story because of its relevancy to the tenor of current media. The Morton Downey Jr. Show may have gone off the air over two decades ago, but “[Downey] was the early pioneer of right-wing populist entertainers,” said Kramer. “He was doing the stuff before Fox News became an institution.”

“The impetus to do a film was how relevant he actually was — not only in terms of Fox News punditry but also in terms of reality television,” added Miller. “Now it’s become all the rage to be confronting. Television is built on confrontation.”

“Though he had a few predecessors, [Downey] kind of released that into the modern era, and to bring him to the fore we thought would be very interesting. It would be something that would engender discussion and debate.”

“You have this great high energy and an outrageous story,” Kramer added. “But there’s also underlying issues there that are pretty serious. All of our films have that.”

After deciding to move forward with the idea, “you go every direction possible with it,” said Newberger. “You try and find a bunch of different avenues that would make it an interesting story to tell. We knew from the outset we didn’t want it to be just a ‘best of’ reel, so we worked to find the story beneath that.”

According to a press release, Magnolia Pictures President Eamonn Bowles stated, “Évocateur is an incredibly entertaining documentary. While we tend to think that everything has gotten so extreme in this age of reality television, it’s shocking to see how The Morton Downey Jr. Show makes everything today pale in comparison. The filmmakers have done a great job capturing that.”

One of the story lines in Évocateur has a somewhat local connection. The Morton Downey Jr. Show was one of the main stages on which the Tawana Brawley case unfolded in 1987. (Brawley is the Wappingers Falls teenager who garnered national media attention for falsely accusing six men, including several local law enforcement officers, of raping her.)

Al Sharpton, a frequent guest to The Morton Downey Jr. Show, incited a confrontational, racially charged atmosphere during his appearances and put forth false allegations which led to several episodes of the show being entered into evidence when the accused rapist Steven Pagones brought a civil suit against Sharpton in the late ’90s. The filmmakers were able to track down and interview the main plaintiff in the case, who still resides in the area.

Along with the accolades earned for Évocateur, Ironbound Films has, among others, produced two Emmy-nominated films: The Linguists, which follows two scientists around the world documenting languages on the verge of extinction, and The New Recruits, a documentary narrated by Rainn Wilson, which examines three business students’ attempts at using entrepreneurial approaches to solve global poverty. Both films aired on PBS; The Linguists also premiered at the Sundance Film Festival in 2008.

To the casual eye, there could appear to be considerable disparateness amid the topics and themes that Ironbound Films explores, but according to Kramer, “the Downey documentary and following two nerdy scientists around the planet have more in common than you think.

“The Linguists sort of feels like homework but is more fun than you’d expect; the Downey film is completely outrageous but is also a smart movie. We like to sort of mix the intellectual and the entertainment, but they all contain big ideas.”

The three principal players at Ironbound cut their teeth as interns and freelancers in film and television in New York City. Shortly after they founded Ironbound, a combination of circumstance and inclination warranted their collective decision to move their company, and their families, north.

Kramer, Miller and Newberger live in Red Hook, Cold Spring and Yorktown respectively, and point to the quiet and inspiration of the Hudson Valley as indispensable to their work and their wellbeing. “Since the 18th and 19th century, artists have been coming up here and staring at the river,” Miller said. “There’s something to that.”

Kramer continued, “This is a very stressful profession, and it helps tremendously to walk outside and be here, in one of the prettiest parts of the country.”

Also compelling is the fact that their offices are housed in a location that is steeped in cinematic history. Ironbound inhabits two floors of the old Golden Eagle building at Garrison’s Landing — behind the massive, etched glass doors that once served as the entrance to Vandergelder’s Hay and Feed Store in the movie musical Hello Dolly.

The trio are active members of their Hudson Valley communities (Miller’s wife Mindy Krazmien is the director of the Putnam History Museum in Cold Spring) and occasionally use local venues for filming their projects. The interview with Sally Jessy Raphael, seen in Évocateur, was taped at the Depot Theatre. “We try and film our projects, when there’s opportunity, around here,” Newberger said.

The group also enjoys sharing their films with local audiences. The Linguists was one of the movies screened last month at the Beacon Film Festival, and “we showed The Linguists to the high school students at Haldane a few years ago,” Kramer said. “It was one of our best screenings. They’re great kids.”

Currently in the works at Ironbound is a new documentary film financed by the National Science Foundation (NSF) called The Anthropologist, a story that surveys communities that are being affected by climate change. Analogous to The Linguists, it follows an anthropologist around the world to communities that are being forced to change their centuries-old ways of life because of melting glaciers, rising sea levels and drought.

Filming for that effort has taken the three filmmakers, and their well-traveled cameras and equipment, to Siberia, Peru and Kiribati, but they are always happy to be back home in the Hudson Valley.

According to Kramer, “The world has changed so much that 15 years ago a company like this couldn’t exist up here, but now we can pick where we want to be, and this is where we went to be.”