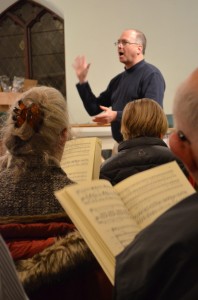 On the evening of Good Friday, March 29, at 7:30 p.m., the Choir of St. Philip’s Episcopal Church in Garrison will present a concert in the sanctuary featuring four different settings of Lux Aeterna (“eternal light”), a text from the Roman Catholic requiem Mass liturgy. Appropriate sections from requiems written by French composers Gabriel Fauré (1845-1934) and Maurice Duruflé  (1901-1986), as well as Britain’s John Rutter  (1945 – ) will begin the program. The choir has performed these composers’ complete requiems in years past at Good Friday concerts.

The highlight of the evening will be a performance of Lux Aeterna by the American composer Morten Lauridsen (1943 – ). Many of his vocal works are now standard repertoire. Some years ago he surpassed Randall Thompson as the most frequently performed American choral composer. His Lux Aeterna premiered in 1997. It is in five movements with Latin texts, each of which refers to light.

Craig Williams, organist at the Cadet Chapel of the United States Military Academy, West Point, will accompany the choir. The entire performance will be under the direction of Dr. Durward Entrekin, music director at St. Philip’s. The Rev. Frank H. Geer is the church’s rector. The St. Philip’s Church Choir consists of 24 members who volunteer their time and talent.

The concert is free and open to the public. The church is located at 1101 Route 9D in Garrison, across from the Garrison School, where parking will be available.