I’ve just about had it: Snowdrops in bloom and warm days in early March hinted that spring was on the way, but Monday’s winter storm warning and promise of 3 to 5 inches of the dreaded “wintry mix” came crashing down around me like a bad dream.

I need some sweetness in my life. 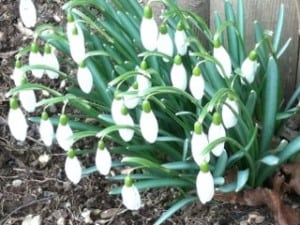 On a happier note, the maple sap buckets disappeared last week and the boiling ensued. It’s proven to be a pretty good year for syrup. Let us now be thankful for these small things.

For a relocated Southerner like myself, who grew up surrounded by Louisiana’s sugarcane fields, the fact that these majestic native trees — which provide such wonderful shade in the summer and a spectacularly colorful show in the fall — have a culinary profile is nigh upon miraculous. That this profile is uniquely delicious is to be celebrated.

There are simple celebrations: the generous pour on pancakes or dollop stirred into oatmeal or yogurt, glazed squash, baked beans, maple candy. But to my mind it’s when used in baking that the unique character of maple’s sweetness comes to the fore.

And while I’m not particularly a baker, this recipe, adapted from Michel Richard’s Sweet Magic: Easy Recipes for Delectable Desserts (Harper Collins, 2010) is one that never fails to satisfy.

The use of parsnips is not as unusual as you might think. Think of it as a variation on carrot cake. Parsnips, a cold-hardy relative of the carrot, are available even this late in winter and provide their own particular sweetness, which supports the luscious character of the syrup. 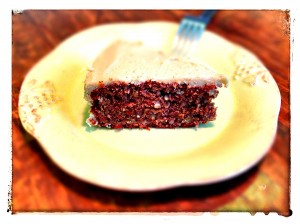 Another unusual feature of the recipe is the use of almond meal instead of strictly flour, which makes for a more substantial cake that’s very satisfying even in small servings. (Someday I’m going to remember to attempt this with walnut meal to doubly reinforce the geographical specificity of the ingredients.)

And just to prove it’s never done until it’s overdone, I’ve added a maple-brown buttercream frosting to doubly extol the maple component and ensure that just a little will go a long way. The brown butter adds an additional nuttiness.

A note on ingredients: Grade A maple syrup may be the gold standard for pancakes and other pourovers, but the assertive flavor of the darker, “less refined” Grade B is much better for baking in general and this recipe in particular. Also, make an effort to get some good cinnamon: Penzey’s (in the Palisades Mall or available by mail online) has a selection, and their extra fancy Vietnamese variety, coupled with the fresh ginger and other fragrant ingredients in the recipe, makes for an unbelievably intoxicating aroma when the cake is in the oven that’s worth the preparation in itself.

1. Preheat oven to 350 degrees and position rack in the center. Butter bottom of a 9-inch round cake pan and line with a round of parchment paper. Butter and flour the paper and sides of the pan.

2. In a large bowl, mix almond meal, flour, baking soda, cinnamon and salt and set aside.

3. In another large bowl, combine syrup, butter and eggs. With an electric mixer, beat at medium speed until combined (about 1 minute). Add contents of other bowl, one cup at a time, mixing between each addition until thoroughly combined. When all of the dry ingredients are incorporated, stir in the parsnips and ginger.

4. Pour batter into pan. Bake until a toothpick inserted in center comes out clean, around 40 to 55 minutes. Transfer to a wire rack and cool in the pan for 20 minutes before removing. Let cool to room temperature and chill slightly before frosting.

1. In a saucepan, heat ½ cup butter over medium-low heat until lightly browned, about 8 minutes. Cool to room temperature. In a large bowl using an electric mixer on medium speed, beat remaining butter for 30 seconds with whisk attachment. Add the cooled brown butter and beat until combined.

2. Add sugar, syrup, vanilla and salt in a bowl and beat on low speed with a whisk attachment until syrup and sugar are incorporated (about 1 minute).

3. Increase speed to high and beat in the cream, 1 tablespoon at a time, until spreadable. Use immediately to frost thoroughly cooled cake and/or refrigerate in an airtight container. (To revive chilled frosting, let it come to room temperature, whip with a whisk attachment until light in color, fluffy, and fully incorporated.)