Parents and friends of a 59-year-old school for the developmentally disabled this week implored Albany to save the Mahopac-based institution, the only one of its type in Putnam County — even as the New York State Legislature rushed to complete a budget severely limiting funds for such programs.

The PARC Preschool announced March 20 that it would close on Aug. 9 because of New York state budget cuts and insufficient resources to fulfill its mission of assisting children with special needs.

Supporters of the school, which currently enrolls 53 youngsters ages 3 to 5, include a Garrison family whose son has thrived at the school to such an extent that he can soon enter a regular kindergarten. PARC Preschool advocates last week launched an online petition drive, urging the state Legislature and Gov. Andrew Cuomo to provide adequate funding. They want the state to re-base, or recalculate, the rate of reimbursement provided to the privately run but state-funded nonprofit institution. 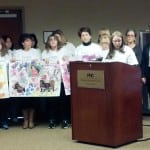 At a forum for families of developmentally disabled children March 23, PARC Preschool teacher Liz Mancusi speaks for the faculty.

In a budget scheduled for completion April 1, Cuomo proposed a $120 million reduction in funds for the Office for People with Developmental Disabilities (OPWDD), which supplies agencies and voluntary programs. With cutbacks in federal allocations factored in, the total expected cutback reached $240 million. However, last-minute budget revisions restored one-quarter of the state share of $120 million. “It’s only $30 million that has been able to be restored, of the $120 million,” Assemblywoman Sandy Galef said Wednesday afternoon (March 27). Both houses of the state Legislature expected to have the budget wrapped up by Thursday night.

Citing the ongoing budget problems, Susan Limongello, executive director of Putnam ARC/PARC, which sponsors the Mahopac school and other programs, termed the preschool shutdown “the hardest decision I have had to make” in more than a dozen years as PARC’s leader. The school provides an education to children free of charge to families, with the state funding, under a law on education of the handicapped.

Although the school could not provide the exact level of state funding, channeled through the Education Department, for the 2012-13 academic year, school and PARC officials said the reimbursement rate is 15 percent less than it was in 2005-06. Moreover, school officials said in announcing the closure, the state reimbursement rates “do not even cover the costs of the children’s education. Over the past 12 years, PARC Preschool has generated a combined deficit of $3,038,519.”

“The basic point is that as costs have risen and the need has risen — more children being diagnosed with autism — the funding from State Ed has gone down,” Rand Otten, PARC’s director of development and outreach, told The Paper on Tuesday. The day PARC announced the school’s demise, the federal Centers for Disease Control and Prevention revealed that 1 of 50 school-age children has autism.

Appearing before the Putnam County Legislature March 6 to accept a proclamation declaring March and April as Developmental Disabilities Awareness Month and Autism Awareness Month, respectively, Limongello warned the legislators of the cutbacks’ implications. The then-proposed $120 million state cut represented a reduction of about $1.2 million to PARC. “We’re at a point right now where we’ve been cut so many times in the last 2 to 3 years — well over a million dollars — that we have no fat to take from our budget,” Limongello said. “We have to go into services now. We have to cut our programs. We have to cut our staff.”

Altogether, according to Limongello, PARC assists about 650 children and adults with developmental disabilities, autism, brain injuries and special needs. The Mahopac school’s 47 employees not only educate pupils at the school but provide evaluation services externally.

A plea for help 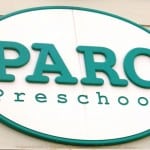 The PARC Preschool in Mahopac, serving developmentally disabled children, is scheduled to close in August due to insufficient state funding.

In signing the petition to state officials, Jane Curtin, PARC’s preschool director, pointed to “the critical need for our program and services in this community, as well as the quality of services we provide. At present, the demand for admission to our program far exceeds the number of children/families we can serve annually. Closing this program will only exacerbate an already difficult situation.”

The father from Garrison attested to the quality of education offered and predicted that closing the school will only cost taxpayers more long-term. “My son attends PARC Preschool, and the school has worked miracles with improving his social functioning, so much so that he will be attending a normal kindergarten this fall,” Peter Stevenson wrote on the petition March 24. “Keeping PARC open will save New York state millions over the years, since kindergartens will not be forced to create as many special ed classes.”

Another petition-signer, Garrison resident Bruce Capossela, commented that “it appears we are forgetting the most sensitive and vulnerable of our young population. I hate to think if I look down the road in the very near future what I will see because of our lack of better judgment.”

In a news release and messages responding to an inquiry from The Paper March 25, state Sen. Terry Gipson and his staff referred to strenuous efforts to restore funding in the state Legislature — a campaign that by Thursday seemed to have succeeded in getting $30 million put back, but not the full amount.

Gipson, whose district includes part of Putnam County, said that March 23 he had attended a legislative forum for families with developmentally disabled youngsters. “Listening to their stories only increased my concern about the proposed cuts in the state budget,” he said. “I’ve been outspoken in the fight to restore OPWDD funds and will continue to advocate better mental health services as well.”

When visiting the county Legislature earlier this month, Limongello observed that ultimate authority lies with Cuomo. “The governor still has single, line-item veto power,” she said.

For now, the state Legislature’s 25 percent restoration “is about it,” Galef acknowledged Wednesday. “At this point there just isn’t the opportunity to restore all of that money in the budget. I wish there were.” She explained that in part the situation involves Washington. “The federal government has said that our Medicaid reimbursement is inappropriate, and some of it comes back to issues dealing with the disabled community — not necessarily PARC, but just in general,” she said.

Nonetheless, she added, “there is some more federal money that’s come through, and it can be used for new programs. So it may be that there’s a way to reposition some of what they [PARC] are doing into a new program.” Moreover, she promised, “I’ll be working with the Education Department, as soon as this budget is over, about the re-basing, to find out why PARC has been having such a problem with this. I totally support their mission and what they’re doing and the people they work with, and the community.”