Although the Butterfield project was not on the agenda of the Cold Spring Village Board workshop on Tuesday, March 26, Village Attorney Stephen Gaba reported on the development’s progress, as “correspondence.”

In a teleconference with property developer Paul Guillaro and his associates — planning consultant Tim Miller and attorney Richard O’Rourke — Gaba presented the timeline for project approval, which the board saw at their last meeting on March 12. That timeline had estimated at least 10 months for Guillaro’s project to be approved by the village and its boards, including a decision on a zoning change crucial to Guillaro’s plans.

After hearing from Gaba that a couple of months could be shaved off the approval process with just one State Environmental Quality Review Act (SEQRA) review at the outset, Guillaro and his team told Gaba they would start working on reports for the single coordinated review.

“It would mean that Mr. Guillaro would have to kind of bite the bullet and have some site-specific reports prepared, pay the cost of having this board have its consultants review them,” Gaba said. Previously, the developer had seemed reluctant to spend money on studies before the zoning change was adopted.

Gaba discussed the zoning change, which would include intergovernmental and business offices as well as retail uses, referring to concerns the public and board members had about the local law not making the concept plan a requirement if the local law was passed.

The draft law now states that the creation of a B4A district “is conditional upon approval of a site plan that is in substantial conformity with the concept plan.” Substantial conformity would mean no increase in the number of buildings; no increase over 10 percent in the size of the buildings; no shift in building location over 15 feet; no variation over 10 degrees in orientation; and no decrease over 10 percent in the open space as depicted in the concept plan.

The amendment also states that the uses on the property are not to deviate from those listed on the concept plan, which will be annotated to include descriptions of the uses for each building. In addition, the draft law limits the total amount of retail space on the property to 13,000 square feet and the total amount of business and professional office space to 32,500 square feet.

Gaba explained the next step would be for the Village Board to establish themselves as the lead agency for the application, which requires sending a letter to other interested agencies and a 30-day waiting period, and to send the expanded Environmental Assessment Form (EAF) that Guillaro submitted earlier to consultants for review, which would be paid for by the developer.

The SEQR process could take around 90 days, after which the applicant would submit to the building inspector, Planning Board and Historic District Review Board (HDRB) for input.

Outgoing Mayor Seth Gallagher reported that they received an invoice totaling $14,000 from the attorney hired by the HDRB to help with the Dec. 5 public hearing on Guillaro’s application to demolish Butterfield Hospital, which was later approved by the HDRB on Dec. 19. At their Oct. 23 meeting, the board had voted to allow the HDRB to consult an outside lawyer, because the HDRB was not comfortable working with Gaba after disagreeing with his interpretation of the code. At that meeting, the Village Board had capped the fee at $1,800.

Gallagher was the only one to vote against hiring the outside lawyer and supported Gaba’s opinion that the HDRB was overstepping its role as architecture review board. “We need to look at what kind of oversight there is on these, when you have a board basically spending money” that the village ends up paying. He suggested that the board go through the bill and see “if there’s a way they can reduce some of those costs.” He listed several examples of charges: “There is billing for two attorneys of the law firm to talk to each other. There’s very little itemization. A teleconference with the chair for $350.”

Trustee Chuck Hustis asked Gallagher if he was attempting to “berate this board for a decision that we made to hire this law firm.” Gallagher explained later: “I would say this money was spent extremely unwisely, and the bill is in our lap now, and we’ve got to figure out a way to deal with it. It’s a teachable moment, if you will.” Both Hustis and Trustee Ralph Falloon responded, “Thank you for teaching us.”

Gallagher had started the meeting by presenting next year’s tentative budget, which sees rising expenditures and lowered revenues. For example, state aid for construction on the Main Street improvement project — 15 percent of which the state was to pay — will not materialize, resulting in a loss of around $120,000. 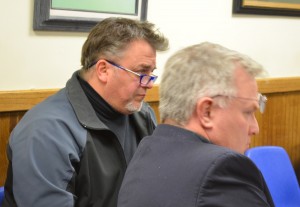 The Cold Spring Police have also requested an additional vehicle that is better suited for police work, especially in the winter. Other increases include rising costs in retirement and medical insurance, as well as a 3 percent raise for the trustees, who have not seen a raise in seven years, and increased funds for the mayor’s personal services.

A projected tax increase of 2.49 percent to balance the tentative budget was still within the state-mandated 2 percent cap (because some of the expenses are exempt from the tax cap).

In addition to the tax increase, sewer rates are proposed to rise to $4 per quarter, or $16 per year. Superintendent of Water and Wastewater Greg Phillips noted multiple projects that need immediate attention to be in compliance with Department of Environmental Conservation regulations and to avoid fines.

A public hearing on the sewer rate increase will take place at 7 p.m. on Thursday, April 11, followed by a budget hearing at 7:15 p.m.

Executive Director Neil Caplan of Bannerman Castle Trust, Inc. (BCT) presented his application to reduce the docking fee of $2 per foot for the Estuary Steward, a 40-foot boat that would bring tours to and help raise funds to preserve the castle. Tours currently run from Newburgh and Beacon, and BCT already offers kayak tours from Cold Spring through Hudson Valley Outfitters. 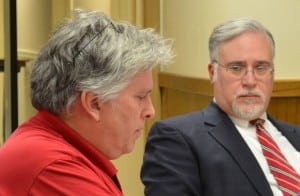 He said the current rate would be too prohibitive for the number of dates they wish to dock (Saturdays and Sundays June to October and every other Friday from mid-June to September). Caplan said the boats could bring over 30 passengers to the village per day, mainly from New York City via the train, which would boost tourism.

Because BCT is a nonprofit and because of the volume of visits, Gallagher motioned to reduce their rate to $0.50 per foot. He was visibly frustrated with the board’s silence, during which former Trustee Gordon Robertson defied Gallagher’s insistence on holding off public comment by saying, “You did promise the residents when they opened up the dock that if you were going to have any scheduled ferry service that you would have an open hearing.” Gallagher said, “By no definition is that a ferry service.”

The motion was seconded by Falloon when Gallagher reassured him that the village could change the agreement later. The reduced rate was approved by a vote of three, with Hustis abstaining and Trustee Matt Francisco absent.