Fiction and poetry spotlighted on April 7 at the Chapel Restoration

Early April may signify the first stirrings of excitement over the nascent baseball season to those in love with that game, but for those locals similarly besotted with the written word, it means that the Sunset Reading Series (SRS) is nigh.

The season opener for the SRS will be held a touch earlier than usual this year, as its home, the Chapel Restoration, is particularly busy with weddings and concerts throughout June, moving the series’ usual May and June dates forward a month. The first will take place on Sunday, April 7, at 4 p.m. Novelist and short-story author Amber Dermont will share the stage with poet (and Garrison resident) James Hoch. 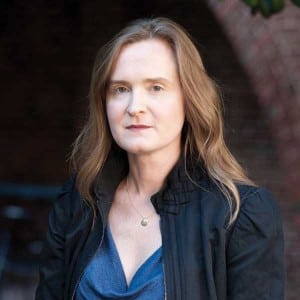 Dermont’s collection of short stories, Damage Control, has just been published by St. Martin’s Press and was favorably reviewed in the The New York Times Sunday Book Review on March 24. Dermont received her bachelor’s degree from Vassar, her Master of Fine arts in fiction from the Iowa Writers’ Workshop, and a doctorate in literature and creative writing from the University of Houston.

Dermont’s first novel, The Starboard Sea, was published just over a year ago and received a front-page Times Sunday Book Review write-up, where it was called “captivating and inspired.” Set in a not-quite-stellar New England boarding school and using the narrative voice of a 14-year-old boy, and addressing both literal and spiritual navigation, it was selected as an Editors’ Choice by The New York Times Book Review and as a Best Summer Reading Selection from O, The Oprah Magazine.

Also reading will be poet and recent transplant to Garrison James Hoch, whose poems have appeared in American Poetry Review, Virginia Quarterly Review, The Washington Post, Antioch,Slate, The Kenyon Review, The Gettysburg Review, Ninth Letter, The Virginia Quarterly Review, New England Review, Pleiades and others. The recipient of fellowships from Bread Loaf, Sewanee and the Pennsylvania Council on the Arts, he also received a literature fellowship from the National Endowment for the Arts. In 2008 he was poet-in-residence at The Frost Place. 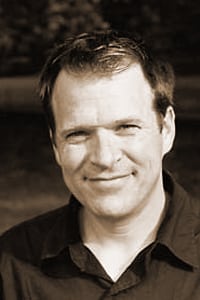 Hoch teaches at Ramapo College in New Jersey. He received a Master of Fine Arts in creative writing/poetry from the University of Maryland and reports that prior to teaching he worked as a “dishwasher, dockworker, cook, social worker and shepherd.” Hoch’s books include Miscreants, published by W.W. Norton, and A Parade of Hands, from the Silverfish Review Press.

Hoch is looking forward to reading at a place he knows well. “I love the chapel space, and I think the series is remarkable in both the quality of the authors as well as the quality of the audience’s attentiveness. I’ll probably read a selection of new poems about my brother deploying to Afghanistan as well as some longer meditations on the environment, and a few poems from either of my two books.”

Hoch and his wife “had been living near Nyack for a few years and usually made a once a month or so trip up to Cold Spring for the tot park. I spent more than a few Sundays reading the Times and drifting off on one of the benches, while my two boys took full advantage of the sandbox. We moved here in July of last year. My wife and I love it here. The community in and around Cold Spring and Garrison has been very friendly and welcoming. There’s a trove of very talented and interesting people, and we’ve felt an immediate connection to the landscape and the community.”

The two women behind SRS, Ivy Meeropol and Rebekah Tighe, are excited to begin a new season of readings. As in the previous four editions, there will be four readings, two each in spring and fall.

A recent fundraiser, held at Cathryn’s Tuscan Grill in Cold Spring, raised enough money, when combined with a grant from the New York State Council on the Arts, to allow the organizers to break even on producing the series. The fundraiser “met our expectations,” said Tighe. “It was a lot of fun — a dance party with a DJ, great music, and an ‘erasures’ poetry (a form of ‘found’ poetry created by erasing words or phrases from an existing text in order to re-characterize it) contest, taken from the first page of T.C. Boyle’s World’s End.” 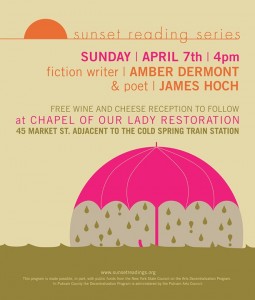 Fundraising will continue with the sale of a movie-poster-sized version of their fifth anniversary poster, which combines images of all of the prior SRS posters. Each costs $50 and can be ordered at the reading or at sunsetreadings.org.

In seeking out authors to read, Tighe said she pursues a number of avenues, including “reading magazines that contain short stories and poetry. When I find someone interesting, I look them up to see where they live, and sometimes it’s Rhinebeck or somewhere like that or New York City, and it’s worth a try. I also look up bookstores all over the place to see who is doing reading tours, and then I check them out, not just for their work, but to see if they’re supposed to be good readers.”

Tighe and Meeropol also rely on recommendations from poet and Sarah Lawrence professor Jeff McDaniel, who is “hooked into lots of writers, because he himself reads his work all over the country,” said Tighe.

Meeropol also makes connections with writers at the many film festivals she attends through her work as a documentary filmmaker. It is through personal connections with Meeropol that May’s SRS author, famed novelist and essayist E.L. Doctorow, was invited. That reading will take place on Sunday, May 5.

All SRS readings are free and accompanied by a wine-and-cheese, meet-the-authors reception afterwards; donations are welcome. Free parking is available at the adjacent Metro-North station.