After living away, ‘it felt right’ for singer to return

If you tell people you’re living in the house you grew up in, the assumption is that you’ve never left. That’s not the case with Anita Merando, who grew up on Parsonage Street and lives there now, but who took a long detour out of town, spending decades on the West Coast before resettling here, near her family, seven years ago.

Merando teaches literacy and project-based learning to a multi-age group of students ages from 5 to 7 at the Randolph School as well as Child Development at Westchester Community College. She also sings jazz standards at Whistling Willie’s on the first Sunday of each month. 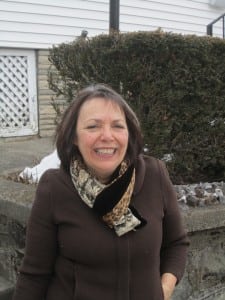 Anita Merando (Photo by A. Rooney)

Merando’s Cold Spring memories include hanging out at the old Dockside Restaurant as a teenager. Her grandfather had a shoe shop on Main Street. She fondly recalls the other Main Street businesses of the day: the barbershop, butcher shop and Palen’s Drugs, where she was known to frequent the soda fountain.

As for her house, her mother was born in it, her father just up the street; they had a “street romance.” There are still many people living on Parsonage Street who lived there when she was a child — the kind of people who made her realize, upon her return, that she’d have to get up by 6 a.m. to shovel her snow, or they’d be out there doing it for her, as neighbors here often do.

Merando was schooled in Cold Spring. She went to the four-room Catholic school and graduated from Haldane. Despite it being “the kind of town people imagine growing up in … where the neighborhood streets were our backyard, and you were summoned by ‘Come in, your mom’s calling you,’” it “grew a little small when you reached a certain point in your teenage years.” Plus, Merando was terribly shy. “I knew everyone’s shoes and not their faces — I was always looking down.”

Despite what she calls poor grades at Haldane due to dyslexia, she “somehow managed to turn a poor average into acceptance to [SUNY] Brockport. It was kind of a disaster, but I met people there who were moving from Brooklyn to Tucson.” Merando took off with them, “checking out Arizona, then San Francisco, and, finally San Luis Obispo,” where she fell in with a group of people working on a defense of nonviolent activists who had organized against the Pacific Gas and Electric Company’s nuclear power plant near Diablo Canyon.

Throughout all of these peripatetic activities, there was singing: singing on her childhood porch to the strains of her grandfather’s mandolin, entertaining the neighbors; singing during her travels. “The music, as much as the principals, brought me into that group of people,” she said. “I was such a quiet person that no one would have thought I would do these things. It was defining to see there were other possibilities. Luckily, when you’re 20 years old, you’re bold.”

Merando’s wandering ways continued as she met a folksinger who sang sea shanties and music connected to the writings of John Steinbeck. He needed somebody to manage his touring itineraries. Together they traveled up and down the West Coast, from San Diego to Seattle. And she kept on singing: “I started throwing harmonies in, and that led to developing my own program for schools.

Despite no formal musical training (dyslexia proves particularly vexing for reading musical notations), Merando persisted. She thinks working on these school presentations “opened the doors for wanting to teach. It was so easy for me to be in a classroom if I was not being the student, but being a mentor,” she said.

Eventually, she settled in Seattle, where she raised her son, Jesse, and opened a music-based preschool in her house partly in order to stay home with him. She gave up doing outside music engagements but remained part of the Seattle Song Circle, where every week people gathered in someone’s home to sing for four or five hours.

When Jesse started kindergarten, someone suggested she apply for a position as an aide in his school’s resource room, and she wound up staying for 15 years, during which time the “incredibly generous PTA” helped put her through school, where she obtained her teaching credential. While teaching in the Seattle school system, she took a teachers’ summer intensive workshop called the National Writing Project, in which participants spent six hours a day, four days a week simply writing.

“They handed us a journal and a pen. For a month we wrote. This shifted everything. I decided to take the stories I was writing and combine them with music — the titles of songs my mom used to sing, Billie Holiday, Ella Fitzgerald. I began putting together sets and looking for musicians to back me up, while still continuing to write stories.”

This combination of story and song, of family tradition, informs her singing today. “What drives me to sing the stories is my mom, and the stories follow,” she explained. “You hear your own voice and you hear the voices of your childhood. It’s a way of putting all the pieces of life together.” She cited “dreaming about my son before he was born and then seeing that he was the dream,” matching up with the standard “You Stepped out of a Dream.”

Merando has been working with her pianist, Steve Raleigh, in what she calls “a fortunate partnership.” Raleigh has a recording studio in New Paltz, and Merando’s next step is to try recording her songs and stories. Meanwhile, she will be back to her once-a-month gig at Whistling Willie’s, with her next show on April 7.

She had to do some convincing before she first appeared there, explaining that by defining it as “jazz” it wouldn’t be scatting, but more “song styling, some improv, playing with melody and rhythm.” One aspect of performing there she particularly enjoys is inviting young singers to join her. “Seeing kids step into themselves and show what they can do is wonderful. If you have the spotlight and you can share it, you should,” she said.

Merando is simply very happy to be home. “It’s amazing to come back here after being away. I was away longer than I lived here. I had a nice career track going with the Seattle Public Schools; it was a hard decision to make to return. But with my son grown, things changed with my marriage, and the rest of my family is here. Now I wish I’d done it sooner.”

6 thoughts on “You Can Go Home Again: Anita Merando”