Breakfast on a tray delivered to your bed is a lovely indulgence, even when it doesn’t quite live up to Downton Abbey standards. Among other things, it delays the moment when you must swing your drowsy legs out from under the covers, plant your feet on the floor, and face the implacable day.

In 1922, Emily Post wrote of the well-run country house, “Every bedroom has a set of breakfast china to match it.” The dishes upon which my recent spate of breakfasts (and other meals) was brought to me were a far cry from the handpainted porcelain Post had in mind, but they did match my room in a sad kind of way. I was in a hospital — a setting that makes up for in medical utility what it lacks in aesthetic appeal — and anything on my tray that wasn’t disposable was designed for easy sanitation. 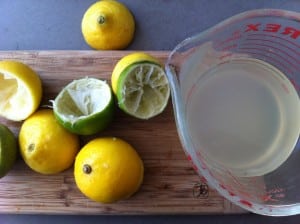 And what of the food? Six times, I emerged from opiate-colored dreams to find a meal that might actually have appealed to an ailing dowager: lime-flavored gelatin, clear broth, apple juice and lemon ice. This was the hospital’s standard post-op liquid diet, identical no matter the time of day. It probably sounds awful, but, honestly, I didn’t mind it. Not only was it easy on the stomach (apart from the lemon ice, which was dreadful), it also reminded me of something I don’t often bother to remember, and that is how good Jell-O is — or, rather, how good Jell-O almost is, and how easy it is to make a homemade version that’s nigh on perfect.

As a child, I loved Jell-O dearly. There was no reason not to! It tasted great and felt wonderful in your mouth — indeed, it is one of those rare foods (chocolate and ice cream are others) where the warmth of your tongue is instrumental in transforming its texture and releasing its flavor. And unlike my fellow Midwesterners, who have covered many a potluck table with scary Jell-O’d versions of familiar dishes — adding canned fruit, mini-marshmallows, cream cheese, salad dressing, and even lunch meats to the mix — I felt no need to adulterate it, apart from topping it with a little whipped cream now and again.

In my 20s, when I was a young editor at Martha Stewart Living, my best friend and temporary colleague, Anne, observed my birthday by asking the deli downstairs to make a giant pan of red Jell-O. The rest of the editorial staff gathered for the celebration expecting the usual Martha Stewart birthday fare: a selection of artisan tarts or exquisitely frosted delicacies. Instead, they were offered Jell-O. Most declined, leaving me to worry that I had just revealed something shameful about myself and my lowbrow background. I halfheartedly tried pretending the whole thing had been ironical, but no one bought it. 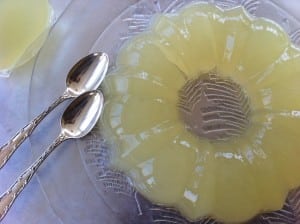 A hundred years earlier, my wobbly treat would have wowed even a gathering of the poshest aristocrats. Back then, extracting and purifying gelatin was such an arduous process that jellied dishes were enjoyed by only the select few. In those days, too, sweet gelatin-set dishes were called “jellies,” a word the British have wisely reserved for them to this day, rather than reassigning it to the stuff in jars that you spread on toast, which already has numerous other names (preserves, jam, conserves, curd, butter, marmalade). In America, we have no generic word for these treats.

Which meant that, when the Martha Stewart test kitchen announced that they were developing a story on homemade Jell-O less than a year after my birthday flop, the best name they could come up with was “Gel du Jour.” The recipe below is adapted from that story. I used to make it often, substituting mint tea or even rosemary-infused water for the plain water. I made it for my kids when they were little and once served it as a palate-cleansing course in an elaborate meal.

These days, Jell-O may be most often encountered on plastic plates. But at my house, jelly will always be served on the good china.

One thought on “Mouths to Feed: A Bit Wobbly”