The uninitiated are often surprised to learn that Beacon, a bucolic Hudson Valley city nestled between the river and its own mountain, is not a particularly bike-friendly place. Even veteran road cyclists describe Main Street as an obstacle course. Its long corridor (about 1 mile from Route 9D/Wolcott Avenue to Beacon’s dummy light at Fishkill Creek) is unusually narrow, with parallel parking on both sides of the street. Despite city laws and fines, people ride their bikes on the sidewalks — safer for them, but not for pedestrians.

Stowe Boyd, a writer, public speaker and editor of the online publication Beacon Streets, said that’s all about to change. Last summer, Boyd collaborated with Bikeable Beacon’s Mark Roland and Scenic Hudson planner Mark Wildonger on a proposal to the state to underwrite the cost of painting “sharrows” (shared lane bicycle markings) on Beacon’s Main Street. These pavement markings, consisting of a bicycle symbol and two chevrons, remind motorists that bicyclists have the same rights to use the full lane but they also encourage cyclists to travel on streets — not sidewalks — and follow the same traffic laws as cars. The team’s proposal was accepted by the New York State Greenway Commission, which granted the project $2,600.

“It’s about regulation and enforcement, but it’s really a matter of cultural mindset,” said Boyd, whose website advocates a “walkable Beacon.” “Outcome from the sharrows — more pedestrians and more cyclists using the streets in a shared way — would change people’s behavior over time.”

“Our project grew out of a sustainability report initiated by Hudson River Sloop Clearwater’s Climate Justice study for Poughkeepsie, Peekskill, Kingston and Beacon,” said Roland. “Beacon’s focus was on bikes, where it was determined that sharrows were the best solution. We adapted that initial presentation for approval by Beacon’s city council.”

According to Wildonger, the sharrows are part of a larger initiative for trails and bicycling and pedestrian activity called the Beacon Loop Trail. “Wherever you are on Main Street you can more easily get down to the train,” he said. “From there, through a grant just received by the city, the Klara Sauer riverfront trail will be connected to the Madam Brett Trail, looping back up to Main Street via Tioronda Avenue along Fishkill Creek.”

Funding from the state is merely seed money, so the team has partnered with BeaconArts.org to raise an additional $2,000 through an Indiegogo campaign (a “crowdfunding” website) for installation costs. The rest of the project’s total budget of $10,800 is offset by in-kind services, such as bike awareness classes taught by Roland, and donated products or materials. 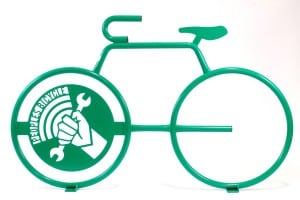 Tom Cerchiara, owner of Beacon Cycles, and Thomas Wright of local design and manufacturing firm Atlas Industries, will be working with Main Street merchants to install a number of bike racks made by Atlas. Peoples Bicycle will be installing six more along the perimeter of Key Food’s new tree-lined parking lot. Their bright green, bicycle-shaped racks were produced by Dero, which also supplied the David Byrne-designed racks outside the Brooklyn Academy of Music.

Jon Miles of Peoples Bicycle admits he was initially shy about taking a public stance on bicycle rights, preferring to work quietly on growing a bike culture in Beacon. He now advocates the sharrows project and its leadership as the most effective way to build consensus through education and visual symbols.

“This is about transportation equity,” said Miles. “There’s an alienation and anxiety that comes with driving a car that projects itself onto everything else. It’s not sustainable if all of us who walk or ride bikes decided instead to get in a car.”

Beacon Cycles will soon expand its bike rental program with a new fleet from Giant. “Although this area of the Hudson Valley is renowned for its challenging mountain bike trails, commuter cycling is just starting to catch on here,” said Cercheria. Wright added, “We are creatures of habit, myself included. The steps we’re taking now are key elements to encouraging cycling as a choice.”

Completion of these projects is targeted for end of April, timed to National Bike Month in May, National Bike-to-Work Week (May 16-20), and Beacon’s Centennial Parade on May 18. Bikeable Beacon’s awareness classes will be held on April 18 and April 25 at 7 p.m. at Beacon’s Community Resource Center, 23 West Center St. in Beacon.