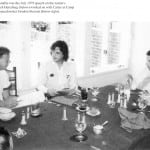 Q: What was your first reaction when you saw an article by Pat Caddell, former pollster/advisor to President Carter, in the PCNR?

A: Something like, “WHAT? Why is one of Roger Ailes’ Fox-hounds all of a sudden barking at me in a local paper?”

A: And for what? Oh no. Not the “Malaise Speech?” He says that I had nothing to do with it and go around telling “everyone I meet” that I wrote the speech alone?

A: Even Pat couldn’t agree with the idea that I had nothing to do with it. Every book, article, White House exit interview, Carter Library Oral History, will confirm I did. It’s called a fact.

Q: Why do you think an attack on you over a 33-year-old speech was suddenly a free story on the Ailes’ paper’s website?

A: Maybe it’s for the same reason that Fox News has mentioned me for the first time ever. It’s hard not to imagine some connection with recent events here. 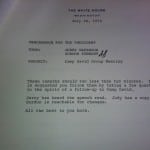 Example of the historic documentation available as evidence of Stewart’s role in the Carter White House (Photos by K.E. Foley)

A: Just recently the Chamber of Commerce took a courageous step in selecting both Elizabeth Ailes and myself for the Cold Spring Chamber of Commerce Business Person of the Year Award. When she rejected the award, instead of simply saying she didn’t wish to share with a competitor, she said the reason was alleged and unspecified “unethical behavior” on my part. So I then wrote a letter to the editor — quote “respectfully requesting” unquote — that she provide some examples of this unethical behavior.

Q: And what happened?

A: Kind of a first for me. She began by announcing my letter wouldn’t be printed, then went on to attack my simple request for facts as “bogus demands.”

Q: So you believe the coverage is not accidental?

A: Roger Ailes has insisted to me in conversation and in writing that he is not involved with his wife’s newspaper. Yet Caddell’s sudden attacks were on his network. When a journalist in New York asked the Fox employee for evidence of my ever having made these claims, he did the same thing as Mrs. Ailes, he attacked the journalist rather than answer the question. So far not one single fact has been produced by Mrs. Ailes or the journalist who works for her husband to substantiate anything they have said.

Q: In his recent FoxNews.com pieces, Caddell asserted that you misrepresented your role in drafting the famous July 15, 1979, speech known as the “Crisis of Confidence Speech” or the “Malaise Speech.” On March 22, 2013, on FoxNews.com, Caddell wrote: “Four years ago, in both print and in interviews, Stewart claimed to be the author of the ‘Crisis of Confidence Speech.’” Have you ever claimed you wrote the speech yourself? 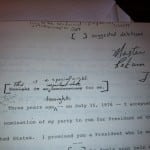 A: No. Until this attack no one has ever claimed that I did. Nor has Caddell been able to produce where I made such a claim. In fact, in the very op-ed column I wrote for The New York Times (at their request upon Hertzberg’s recommendation, not as some act of self-promotion as Caddell imagines), there is a full paragraph saying that Pat’s ideas were at the heart of the speech.

Q: So you did work on the speech?

A: Of course I did. Jimmy Carter wasn’t handing out invitations to Camp David like nightclub passes. Robert Schlesinger’s book clearly states that Hertzberg and I were summoned to Camp David on July 9 to work on the speech, and his description of events along with those of Prof. Kevin Mattson’s entire book on the speech, along with my exit interviews upon leaving the White House, and in interviews for the Carter Library.

Q: Caddell cites your New York Times op-ed piece in 2009 as evidence for his charges. What do you make of that? 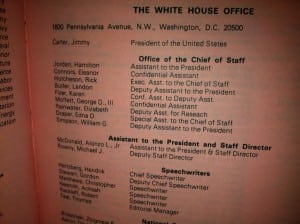 A: The irony is that in attacking me, he has damaged his own record, because in everything I’ve written about the speech — with The New York Times op-ed piece he cites — I have expressly credited Pat Caddell for his role and ideas. The fact he is willing to sacrifice credible testimony to his own central role in the speech, presumably at his employer’s behest, is — frankly — sad.

Q: Why do you think the PCNR is making so much of this?

A: This came immediately after Mrs. Ailes found herself embarrassed after rejecting the chamber award. Amazingly, she refers to me as a “divider” because I accepted the award! Sadly, other actions taken include refusals to support allegations, refusals to print requests for support, but instead launching more and more personal attacks.

Q: What do you think can be done?

A: I am sorry to say, I honestly don’t know. I do know that appeals to “both sides” to step back, however worthy, won’t be effective because one side already has always been willing to share. I have to say, as many have, that many current practices of the Ailes’ paper seem like a sharp break from the 144 years of its prior existence. When we moved here I quickly became fond of the PCNR. It was quirky, calm, quiet, and above all, decent.

Q: Can we get that sense of decency back?

A: I think we can, just like the Chamber of Commerce is doing to slowly help rebuild our sense of common purpose, just as I hope many of us will share in making Community Day a July 4th for all. Taking specific actions together will help. So will keeping our discourse civil, and our differences resolved with facts, not rhetoric.