Search for new village attorney may be on the horizon

The three recently elected members of Cold Spring’s village government were quickly and quietly sworn in on Monday night (April 1). Newly elected Trustee Stephanie Hawkins, who won by nine votes on March 19, was the first to be sworn in by Village Justice Thomas Costello, followed by re-elected Trustee Bruce Campbell and Mayor Ralph Falloon. 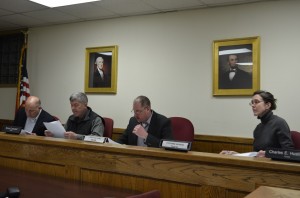 Their first meeting on Wednesday, April 3, went relatively quickly through reorganization and a board workshop. Falloon began by reporting on resignations from appointive boards and the subsequent shuffling of members from board to board. Discussion of the draft budget was basically tabled to their next meeting, due to the absence of Village Accountant Ellen Mageean. The workshop ended with a suggestion to begin a search for a new village attorney.

Former Planning Board Chair Joe Barbaro resigned from the board effective March 31, citing in his letter increased work and family responsibilities as reasons for being unable to complete the last two years of a five-year term. Planning Board Member Placito “Parge” Sgro also stepped down March 31, which was the end of his term, and asked in his letter not be reappointed. Falloon reported that Peter Downey of the Historic District Review Board said in a phone call that he would not continue on that board after March 31.

Because of these changes, some members of other boards have moved so that all boards have at least a quorum, or minimum of four members. Barney Molloy, who was recently appointed to the Zoning Board of Appeals (ZBA), will now join the Planning Board, and Jim Zuehl will serve as interim chair of the Planning Board. Donald MacDonald will serve as interim chair of the ZBA before moving to the Planning Board, and Ed Murphy, who recently became an alternate, will resume an active role in place of Dick Turner, who passed away in March. Marie Early will move from the Historic District Review Board (HDRB) to the ZBA. The village will post the openings soon so that the boards can begin interviewing for new members.

In addition to the shuffling of the appointive boards, a couple of new liaison assignments were created for the trustees — Bruce Campbell, a member of the Boat Club, will now serve as their liaison, and Falloon and Hawkins will serve as liaisons to Putnam County.

At the end of his presentation on reorganization, Falloon explained that Campbell’s record of prolific service to the village as well as his view of the role of deputy mayor led him to reappoint Campbell to that position. “Bruce explained how important it was for him to know and understand what the mayor was trying to accomplish and to be ready at a moment’s notice to step in if he needed to,” said Falloon. The board then voted and approved Falloon’s reorganization. 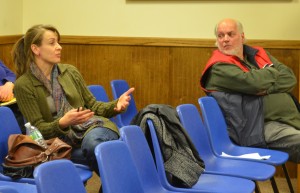 HDRB Member Kathleen Foley explains that they needed to consult an outside lawyer under very unusual circumstances and possibly saved the village more money in litigation costs.

Near the end of the workshop, Hawkins asked what the process was for appointing a different village attorney, adding that she was interested in searching for a new firm. Trustee Chuck Hustis, who was absent from the meeting, had sent the board a letter clearly disagreeing with the reappointment of Stephen Gaba as village attorney.

Hawkins reminded her colleagues that the previous board had voted to begin such a search at their Oct. 23 meeting. That vote happened at the height of disagreements over Gaba’s and former Mayor Seth Gallagher’s interpretation of the Historic District chapter of the Village Code, but as the controversy died down in later months, so did calls for a new lawyer.

Campbell brought up what he called his “well-known” confusion that led to his “yes” vote that night, which was not how he had meant to vote. “You could have walked out of that meeting not even knowing your name,” he said, adding that a complaint from one board to theirs about a contractual employee might require more thoughtful discussion than was achieved that evening.

Hawkins pressed to put the search on the agenda of a future meeting, and they agreed to discuss it at their April 16 workshop.

On the bill amounting to around $14,000 received by the village from the firm of Daniels, Porco and Lusardi for attorney services engaged by the HDRB late last year and presented at length during their last meeting, the Village Board clarified that the consultation fees in question had not previously been capped. The consultation of a historic preservation lawyer, Bill Hurst, had been capped at $1,800, but the HDRB wished to consult a separate attorney to prepare for the Dec. 5 public hearing on and later resolution approving the demolition of Butterfield Hospital. 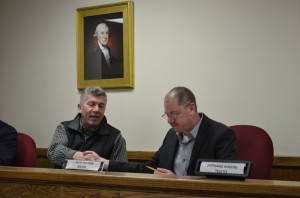 Falloon reported that the firm has since approached the village to negotiate the fees, and Trustee Matt Francisco, who has had experience working with attorney fees, agreed to speak to them the next day. Falloon said that new policies and procedures were needed for all of the boards to prevent such unexpected and high charges in the future.

The tenor of Wednesday’s meeting was markedly different from those with the previous administration from the outset, when Falloon asked the audience for public comment on the agenda items, though nobody had any. A few audience members also participated throughout, in response to the board’s discussions, and were not met with directions to wait until the end of the workshop.

Acknowledging the need for more understanding of Freedom of Information and Open Meetings laws, Falloon reported that he has invited the director of the state’s Committee on Open Government, Robert Freeman, to speak on the laws, and he encouraged attendance by all of the village boards as well as the public. The tentative date is May 22, pending confirmation from the speaker and venue.