Upwards of 50 Putnam County residents, including many from Philipstown, held a protest demonstration outside the Old County Courthouse last Wednesday night (April 3) to oppose the position of the Putnam Legislature, which had previously voted to condemn the passage of the state’s new gun control SAFE (Secure Ammunition and Firearms Enforcement) act. The protest group, organized under the banner of Moms Demand Action for Gun Sense in America, had hoped to present to the Legislature at its monthly meeting that evening a petition with 550 signatures that objects to the county legislature’s actions. 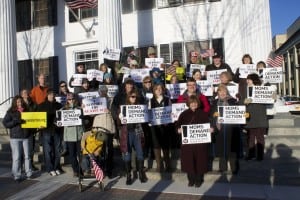 From a statement she read at the rally (full text below), organizer Alexandra Dubroff of Nelsonville said in part: “When I heard that Gov. Cuomo and our brave legislators had worked across party lines, and had done what needed to be done to bring sensible gun violence prevention legislation to pass in New York state, I was so proud to be a New Yorker. Then I heard the news that the Putnam County Legislature had passed a Resolution to Repeal the NY SAFE Act in a unanimous vote. I was outraged. How could they do that? My town is only 45 minutes from Newtown, Conn. Weren’t they affected like I was by this tragedy?”

Dubroff said that after receiving initial assurances from Barbara Scuccimarra (Philipstown’s representative) and another legislator that they would be allowed to appear and speak, ultimately legislative chairman Richard Othmer ruled, prior to the meeting, there could be no public comment on matters not on the agenda of the meeting.

Dubroff pointed out that the county resolution in question was passed without prior public notification and did not go through the usual committee process before being presented to the full Legislature. Her group, however, has been told they will have to appear before the Legislature’s Protective Services Committee on May 8 before any consideration of addressing the full Legislature is given. Dubroff said the group had every attention of attending that meeting and pursuing the matter of formally presenting the petition. 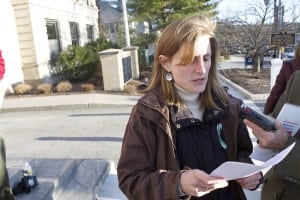 Nancy Montgomery, a member of the Philipstown Town Board, was the only elected official to join the demonstration. “I am here because I wanted to stand behind and support Alex. This was a courageous endeavor as she set out and gathered all those signatures. And I am also unhappy with the way the (county) Legislature is representing or not representing my town on a number of issues. I am confident the New York SAFE Act is going to hold. I think the point is we have to look at our representatives on a county level and see if they are representing us the way we want to be represented.”

John Teagle, Margaret Yanco-Haines and Joyce Blum were among those from Philipstown attending the protest.

Hello. My name is Alex Dubroff. I am a member of Moms Demand Action for Gun Sense in America, but more importantly, I’m a mom to two beautiful children. I live in Cold Spring, N.Y. I am here today, along with all of you, some of the signers of our p

etition to the Putnam County Legislature that has over 530 signatures. We are here to show our support for the NY SAFE act.

Dec. 14, 2012, was my wakeup call. I was woefully ignorant about the gun violence in this country prior to that day. When I heard of the senseless killings of those children and teachers in Newtown, Conn., I was brought to my knees in my living room in horror and sadness. I know Newtown; I lived there. It is just like Cold Spring. A small town filled with great caring people. That day, I counted down the minutes until 3:05 when I could go pick up my son from kindergarten. I ran all the way to the school, held him in my arms and did not want to let him go.

It was on that day that I realized that my son and daughter are not safe in this country. And it was on that day when my resolve was steeled to help affect change. This will not stand. This is not right. There are eight children every day that die in this country from gun violence. There have been 3,053 deaths from gun violence since Newtown alone. Today is the anniversary of the Binghamton Massacre in 2009, where 13 people were murdered. It does not have to be this way. There are commonsense gun violence prevention steps that we can take to lessen the chance of these tragedies happening again.

And so, when I heard that Gov. Cuomo and our brave legislators had worked across party lines and had done what needed to be done to bring sensible gun violence prevention legislation to pass in New York state, I was so proud to be a New Yorker. We were the first state to pass a gun violence prevention package after Newtown. I felt that it was a statement about us as a people. We knew what was right and just did it, for our kids, our neighbors, our loved ones. We put aside our affiliations with strong lobbying groups and political parties and did what needed to be done. It gave me hope — hope for my children and hope for the safety of others.

Then I heard the news that the Putnam County Legislature had passed a “Resolution to Repeal the NY SAFE Act” in a unanimous vote. I was outraged! How could they do that? My town is only 45 minutes from Newtown, Conn. Weren’t they affected like I was by this tragedy? Wasn’t their resolve steeled to make positive change?

Unfortunately, as I’ve dug deeper into the history of this resolution, not only was it passed unanimously, but it was passed without public notification nor through a committee for vetting. It was brought directly to a vote in the full Legislature, added to the agenda on the day of the vote under “Other Business.” Now, this may be politics as usual, but, I for one will not allow this to pass unnoticed. This issue is too important to me, as a mom and as a citizen.

The day that I found out about the resolution, I started our petition, which you have all so graciously signed. I have been humbled by the outpouring of support and truly believe, if we steel our resolve together, we can make change.

I’ve been told that I can only present our petition at the Protective Services Committee meeting on May 8. I urge you to join me at that meeting. According to a poll published in March, 61 percent of New Yorkers support the NY SAFE Act. Our county legislators need to know that.

Also, I urge you to call and email and visit your senators and congressmen to tell them how you feel about this issue. They are hearing from the lobbying groups at a ratio of 5 to 1 to our calls. We are the majority, we are finding our voice and we need to be heard.

And lastly, I ask you to join me as a member of Moms Demand Action for Gun Sense. We are a nonpartisan group of moms, dads, grandmas, grandpas, aunts, uncles, neighbors, friends and, most importantly, citizens who are demanding commonsense gun legislation for this country.

Together we can make positive change. My resolve is steeled. Thank you for everything you’ve done and you continue to do. I am truly grateful for each and every one of you.