Living Yoga co-owner Liz Schulman was once influenced by her two partners, Courtney Tarpley and Richard Villella, without having actually met them. An explanation: Tarpley and Villella are the founders of Yoga Zone, which was the first multi-unit yoga studio in Manhattan. About 15 years ago, Schulman did her teacher training at Yoga Zone, but that took place the year after Tarpley and Villella left. 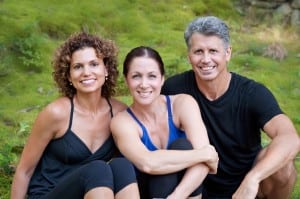 Fast forward more than a decade to two years ago, when Tarpley took a class of Schulman’s at The Garrison, where Schulman had leased a space and turned it into a yoga cooperative. There was, said Schulman, an “immediate synergy” between them, particularly in relation to teacher training, and, with Schulman’s lease coming to an end, they decided, as a trio, to open their own studio. That studio, which opened last October, is Living Yoga.

Living Yoga specializes in and in fact offers solely Vinyasa yoga, a flowing style with an emphasis on breathing. Not only is the studio dedicated to Vinyasa, but all of the teachers (who now number four, in addition to the partners), are Living Yoga-trained, the purpose of that being, said Schulman, “to create a cohesive system.”

“Other studios have an eclectic mix of styles. We know and teach Vinyasa. We have a cohesion from class to class, so the language will be familiar throughout. There isn’t a huge deviation in style here in terms of teachers, just personality and of course the level of the class.”

Schulman was drawn to Vinyasa because it’s “an active physical form — stretchy. If you’re a physical person who likes to work hard, it’s great for you. The style pushes the breath to the forefront. You can feel the difference and relax into the breath. We don’t shy away from giving people a workout; we believe in strength.”

A look at a Level 3 (the highest in difficulty) class on a Wednesday morning recently gave weight to these words. Eighteen people, some men, mostly women, laid their mats down in the large studio room, painted in several different hues of a calming blue-green. As the class got started, Schulman drew an analogy between her daughter’s recent acquisition of a driver’s learning permit and the window between obtaining knowledge at the beginning of a new activity and the later ability to use that knowledge without consciously thinking about it.

“What struck me about it,” Schulman said, “was the process of where she is to where I am: study, focus, being absorbed in a way that you don’t need the object anymore; there’s a continuum. What we’re doing here in this room is the same. We don’t have to think so much; although we want to retain an open beginner’s mind, we are free to work on the quality of our minds. We can transcend the body and have more subtle experiences.” 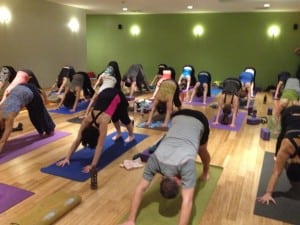 A class in session at Living Yoga

After that opening, Schulman guided, with instructive words and an occasional gentle correction as she moved through the room constantly, navigating those in the class in a flow of changing positions, telling them to — among many other things — “lengthen your spine as you arch your back — have room for your chest to drop,” “make sure your right hip comes above your knee; this pose can often make you feel stuck — it confines your freedom within the boundaries of the pose.”

Throughout, there was a language of poses: Lizard, Reverse Prayer, Warrior 1, which the participants were obviously familiar with at this level, as they moved into them almost in unison. After about 60 percent of the class time had elapsed, there was an almost palpable rise in energy in the room, which lasted until Schulman slowed things down and brought the session to an end with a more meditative pace.

It was not clear to this observer whether Schulman was working extemporaneously, or if the whole session had followed a set sequence. Explaining, Schulman said, “I always write my classes by doing my practice. However, any good teacher still has to teach the people in front of them. In particular with Level 1, there is a mixture of experience and people who have never done it before. You can’t stick to your sequence or you’re not addressing the needs of everyone in the class.”

Their clientele is a mixture of those who used to take classes at The Garrison and many new students, some of whom try it out after simply spotting it while at the plaza for other purposes. One of the “old” guard is Glen Cavanagh, a veteran of many years, who praised the studio.

“Classes rotate from week to week, working different areas of the body. At some places [the teachers] repeat the same classes over and over and it doesn’t work your whole body. Here the flow is impeccable, with the pacing linked to breath, and no jarring transitions. If the pace is too fast, you can get a full inhale or exhale, and if it’s too slow, you’re left gasping because the movement is not in sync with the breath.”

Asked what she thinks the most common misconceptions about yoga are, Schulman offered a counterpoint: “People often think it’s not a workout, or, on the other hand, that you have to be really flexible to do it. But the whole philosophy is that you start where you are and make it work for you. Also people don’t fully understand the scope of the practice. Westerners tend to see it as physical, but there is a deep philosophy in the practice, which can change your life. You can have as much as you like or as little as you like, but there is a depth to this practice which moves beyond the body — it’s not interchangeable with Pilates or going to the gym; it’s very multi-layered.”

Classes are available in different multi-class packages, and one can drop in and try just one for $18. Classes are offered seven days a week. Other teachers are Jenn Stebbins, Leslie Mott, Beth DeWit and Amanda Amadei. There are discounts for teachers and various emergency responders and the military.

A teacher-training course recently concluded, and another will be offered in the fall. Each month the studio hosts Yoga Beats, a two-hour, extended-level (above Level 3) “hard, sweaty” class set to a particular style of music — they’ve done ’80s and funk, and next up is “Diva Night” with an all-female line-up of songs.

Living Yoga also offers a teachers’ advancement program, continuing education for teachers on various topics. There’s even a book group that meets every six weeks or so. The overall goal, said Schulman, is to make Living Yoga become “not just a place for class, but to foster a sense of community — we’re thinking that way moving forward.”

Living Yoga is located at 3182 Route 9 in Cold Spring (Perk’s Plaza) and can be reached at 845-809-5900. For more information, visit its website at livingyogastudios.com.