Members of the Garrison Volunteer Fire Company (GVFC) clashed with the Philipstown Town Board last week over spending at the Route 9 firehouse for a new bathroom — the fifth, by one count — a project for which the Town Board has sought information for three months.

A shouting match at times, the disagreement occurred at the Town Board’s formal monthly meeting Thursday night (April 4). It involved GFVC accusations of “intolerable” interference and “micromanagement” of fire company affairs and counterclaims that the Town Board must monitor GVFC finances because the company gets money from taxpayers through the town budget.

The dispute is reminiscent of a 2011 fight in Cold Spring between then-Mayor Seth Gallagher and Cold Spring Fire Company No.1. Although the Cold Spring fracas flared over firehouse keys and the Garrison case features a bathroom, both involve questions of local government authority over a volunteer fire company.

The bathroom project came to light when firefighters asked for a waiver of the building permit fee for a bathroom installation. Last November, the board approved the waiver. But at a January workshop with GVFC leaders, board members expressed dissatisfaction at the way they belatedly learned of the project — from the building inspector — and asked for data on the bathroom costs. On that occasion, GVFC President Betsy Calhoun promised to supply the information.

Early in Thursday’s meeting, responding to a question from Supervisor Richard Shea about the delay, she again agreed to pass along written details.  “We’re still working on it … the bathroom,” she said. “We’ve spent about $20,000.”

However, during the later public comment period, a GVFC firefighter, Steve Rosario, accused the board of meddling — allegations echoed by Calhoun.

“I’m glad to see the Town Board has so much time on their hands they can get involved in the minutiae of the construction of a bathroom,” protested Rosario, a former Town Board member and unsuccessful Democratic candidate for Putnam County Legislature. “That is disparate treatment.” 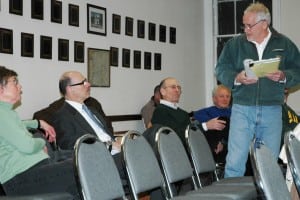 Pointing out that the GVFC reports to the Town Board monthly, unlike other Philipstown fire companies, he said the GVFC is “constantly having to defend” itself. “Delving into the day-to-day work that we do I think is really unnecessary and a waste of your time and our time when we could be doing other things.” And when the Town Board asserts a right to make decisions about the bathroom, “that’s micromanagement,” he added.

Shea and Town Board Member John Van Tassel, a veteran firefighter in the North Highlands Fire Department, replied that the GVFC began reporting monthly to the board to promote awareness of its activities and that the three other Philipstown departments have different jurisdictional obligations.

“It’s not as if Garrison has been singled out,” Shea said. The monthly reports were “not something where we said ‘you have to come in and do this.’ If you don’t wish to do it, you don’t have to.” Moreover, he contended, the request for details on the bathroom spending “is a simple request. I don’t think it’s micromanaging just to be good stewards of taxpayer money. We do need to know when there’s going to be a large expenditure. And it’s my responsibility as chief financial officer for the town to see where money is being spent.”

“You have one money stream. It’s the Town of Philipstown,” Van Tassel told Rosario. “And we are responsible for overseeing your budget.” He said that in January, when the GVFC said it needed to spend $25,000 on an urgent basis for radios, “we supported it 100 percent. We agreed it definitely was a necessity. Then we find out tonight that we spent about $20,000 on a bathroom we knew nothing about. We asked several times for a budget, for what’s been spent to this point. And we have yet to receive anything. We have a job to do … to monitor the budget of the Garrison Volunteer Fire Department. We have no idea where the money came from for a $20,000 or a $30,000 bathroom.”

Audience member Joe Regele, a longtime critic of GVFC spending practices, said the $20,000 showed up in a 2009 audited GVFC financial statement. At that time, “the Town Board actually issued explicit instructions to the Garrison Volunteer Fire Company not to go ahead and work on this bathroom. I thought that issue was dead” and that the construction “had been explicitly prohibited,” he said.

He noted that the board had increased the fire company’s budget allocation in recent years. The town budget provided $585,771 for 2011 and $596,269 for 2012. If the GVFC requires such infusions for normal operations, he wondered, “how could there be enough money laying around to finish the fifth bathroom?”

Regele also said that while the GVFC plans its bathroom, the town park makes do with two portable toilets for athletic activities by hundreds of children and other residents. “I think our priorities are wrong; I think something is broken,” he said. Regele also maintained that “there’s been a lot of slippage in terms of watching the spending” and urged stronger oversight of the fire company. “The Town Board clearly has authority.”

He cited, and later provided a copy of, a memo by the New York Department of State Committee on Open Government quoting a court ruling on volunteer fire companies. In part, the court declared: “Not to be ignored is that their [fire companies’] existence is inextricably linked to, dependent on, and under the control of the municipalities for which they provide an essential public service.”

Calhoun objected to both Regele and the Town Board. “I think it is utterly despicable to continue this conversation,” she said. “It’s a waste of time, a waste of money, and it’s insulting.” Town Board questioning “has just been intolerable” and the fire company is “sick and tired of being tortured about the stupid bathroom. I’m not going to tell you how much it cost. I don’t even know how much it cost — so there!”

“This is a time of needs, not wants,” Van Tassel said. “Maybe a fifth bathroom is a need. We didn’t have an opportunity to decide that.”

“We’re just asking for a budget for an expenditure,” Shea said. “We will get it; there’s no doubt about that.” He likewise suggested the GVFC stance raises contract concerns. Financial reporting “is in the contract. It’s a legal matter,” the supervisor said.

In a section on budget changes, the 2013 contract between the town and GVFC states: “The parties agree that any change in an expenditure over $5,000 that was specifically set forth or itemized in the fire company budget shall require prior email notification and discussion with the Town Board.”

Whether the bathroom project specifically appeared in a fire company budget is not clear.

Board Member Nancy Montgomery, who also has a long record with emergency service activity, juxtaposed the dispute against worries about finding sufficient volunteers and public demands for openness by the fire companies and other public agencies.

“We as a Town Board are trying desperately to hold onto this service for our community,” she said. “And we understand it’s getting more and more difficult with the pressures of the transparency, the information the public wants from us, from your budget,” she said. “We have to answer to it, and we don’t have the answers. We will do whatever we can to support you in fighting fires and protecting our community. But we need to know what your money is being spent on.”