Over the course of seven seasons, Depot Docs has brought the work of several first-time filmmakers to Garrison’s Landing, among them Ivy Meeropol (Heir to an Execution), Sebastian Junger (Restrepo) and Cindy Meehl (Buck). These films have earned awards and accolades far beyond what might have been fairly expected of a fledgling effort. Could it be that the ubiquity of affordable, easily portable, user-friendly digital moviemaking equipment over the past 15 years has meant that anyone with a story that must be told, a curiosity that must be assuaged, or an interest in how the world works (or doesn’t) that must be plumbed, suddenly had the key to a whole new box of creative and expressive tools to work with? 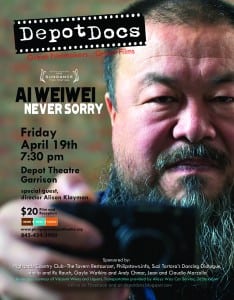 If this question interests you, or if you’d just like to see a fascinating and intimate filmic portrait of China’s most renowned avant garde artist and political dissident, you’ll want to be at the Philipstown Depot Theatre on Friday, April 19, to meet Alison Klayman and to see her multi-award-winning feature documentary, Ai Weiwei: Never Sorry.

Klayman didn’t discover that she was a filmmaker until after her graduation from college in 2006. She went to China on a trip that was supposed to last a few months, canceled her ticket home when she decided to stay in Beijing and perfect her language skills, and started looking for work.

In 2008 she became an accredited freelance journalist and produced feature documentaries for radio and television. (It was the year of the Beijing Olympics.) Her roommate, who worked at a Beijing gallery, noticed the new camera she’d just bought and asked her if she’d like to make a video for an exhibition of Ai Weiwei’s photographs. She agreed that she would do it gratis but would retain ownership of the footage.

It was at that time that Ai’s artistic practice and political convictions were merging, as he began a campaign to shame the government over the deaths of thousands of children in shoddily built schools that collapsed during the 2008 Sichuan earthquake. Klayman says she “lucked out” in capturing the saga of Ai’s transformation from eccentric, internationally celebrated conceptual and installation artist, photographer, designer and filmmaker, to eccentric, internationally renowned political dissident and fearless scourge of the Chinese Communist Party and its hold on power.

If, as was famously said, “luck is the residue of design,” what was Klayman’s design once she realized she had a very big and important story in her viewfinder? She told a New York Times reporter, “I just wanted to think something new about China, to do something good and show who this guy is.”

For those of us only vaguely and imperfectly familiar with China in its current (or any other) incarnation, the view Klayman gives us after three years inside Ai’s orbit is both shocking and unsurprising, as the Party attempts to maintain its top-down control of development and the parameters of political space in the face of enormous cultural and economic changes, and the ultimately irrepressible technological changes constantly generating new, user-friendly forms of social media. Such means of communication enable the sharing of possibilities not sanctioned by the State and conversations that go beyond the bounds of the “official story.”

As for Ai, Klayman’s “David” is presented as an uncompromising freedom fighter who grew up with his father, a major Chinese poet and literary figure declared an “enemy of the people” under Mao and forced to live in exile in a remote part of China. After the family returned to Beijing in 1975, Ai enrolled in the Beijing Film Academy and co-founded the avant garde art group “The Stars.” For 12 years he lived in the U.S., mostly in New York, where he studied at Parsons School for Design and the Art Students League of New York.

Klayman was able to document this period with archival footage and interviews, but she otherwise spends little time recounting the growth of Ai’s international reputation and his prodigious accomplishments. Rather, given the drama of Ai’s contest of wills with the Chinese government’s “Goliath” happening in real time, she wisely stays focused on that still unfolding story, which is, perhaps, Ai’s greatest artistic achievement so far.

Ai Weiwei: Never Sorry will be shown at the Philipstown Depot Theatre, Garrison’s Landing, on Friday, April 19, at 7:30 p.m. A Q-and-A with Klayman and a reception will follow the screening. Reservations are advised and can be made by calling the Depot Theatre at 845-424-3900 or on philipstowndepottheatre.org.