Some residents near the Cold Spring waterfront, alarmed by the presence of the New York State Department of Environmental Conservation (DEC) at the Boat Club property on Tuesday, April 9, attended the Village Board meeting that night to voice their concerns about the coal tar cleanup that was last discussed two years ago. Cold Spring Mayor Ralph Falloon, aware of their concerns, began the meeting by asking the board to add the cleanup to the agenda, which they did.

In order to clean up coal tar contamination resulting from a 19th-century manufactured-gas plant that operated on the site where the Boat Club now stands, the DEC originally planned to demolish the boathouse but later issued a record of decision (ROD) in February 2010 to spare it because of local opposition. Residents later turned out in public hearings to support removing the boathouse. When the DEC visited again in Spring 2011, they reiterated their willingness to revisit the ROD, advising the village to send a letter requesting the removal of the building in the cleanup. (Asked after the meeting whether such a letter had been sent, Falloon said it had not.)

During the meeting, Falloon explained that the DEC personnel were at the Boat Club that day collecting samples to determine where the ledge and soils are underground. Trustee Bruce Campbell added that they would be at the site the rest of the week to continue testing. Both Falloon and Campbell had spoken with the DEC about looking at the ROD again.

“I’m not looking to decide whether we should say we want the boat club removed and cleaned up or not,” assured Falloon, “but I think it’s something that we should think about in the future.” He explained that once the DEC remediation is complete, the village, which is the owner, would be responsible for any further remediation. If the building were removed, then the village would also be responsible for replacing it, but Falloon said the removal might be worthwhile. “Maybe just replacing the building now is a lot cheaper than 10, 20, 30 years from now replacing the building and remediating it ourselves.”

Campbell assured the audience that the new engineer in charge of the project plans to make all information on the project available to the public. “He knows that if there were going to be excavations that it falls in line with the winter months so people have their windows closed; there’s going to be some odors, some dust,” he said. “A lot of that stuff was brought in the public hearings that we’ve already had.”

Falloon noted that remediation would not begin until 2014 at the earliest, so there would be time to discuss revising the ROD. 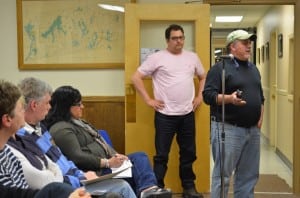 Water and Wastewater Superintendent Greg Phillips speaks as a resident on DEC work at the Boat Club during the Village Board meeting April 9.

Water and Wastewater Superintendent Greg Phillips, a resident of New Street across from the Boat Club, said that although he and several other residents had signed up to receive email alerts about the project, they had not received anything in over a year. “I didn’t know anything about this until they showed up,” he said. “They have already decided that this is happening. That is not the way it was left at the last public hearing, not at all.”

He added that he was for demolishing the boathouse. “We’re only looking at it because there’s a shack there that has nice siding on it and is a good spot for some people to be there,” but he and his family would be there all the time, and he would prefer to have all the contaminant removed at once or not at all. Three other residents echoed Phillips’ opinion.

Earlier in the meeting, Phillips reported that Mainlining Services, Inc. (MSI) began work on Monday to continue their project to clean and cement-line the water mains, which was suspended over the winter. While MSI said they could be finished with the entire project to the end of Main Street by Memorial Day weekend, Phillips anticipates glitches that could delay work. He mentioned the difficulty of rerouting water to side streets and the inevitability of water discoloration and reduced pressure while that happens, but he said they would try to give ample notice of planned events as well as prompt explanations of unplanned ones. He urged those who are not yet signed up to receive email alerts from the village website, coldspringny.gov, should do so in order to keep abreast of news on the project. 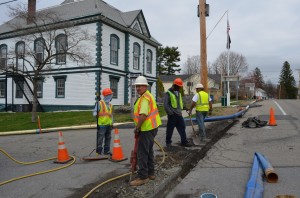 At the village’s April 16 workshop, the Wastewater Department’s engineering representatives will discuss upgrades to the water treatment plant, which could cost around $1.3 million. As if to demonstrate the need for upgrades, two major failures occurred there in the past week, with one requiring the village to authorize a large purchase.

Phillips reported that a grinder unit, which shreds all material coming into the plant, broke down last week. The most efficient solution was to ship the grinder to the manufacturer for repair or exchange. He recommended exchanging the unit for a refurbished one, which would take the least amount of time and might not be much more expensive than having it repaired. The board approved his recommendation to exchange it at the cost of $11,802.50.

The Recreation Commission and Cold Spring Area Chamber of Commerce reported on planning for the May 5 Putnam Cycling Classic and the accompanying Pedaling Into Spring Festival set for that weekend. Cycling Classic organizer Ray Fusco said that because of the work on the water mains, they have decided to change the route on the cyclists’ finish to avoid the metal plates on Main Street.

For the festival, Chamber President Vinny Tamagna and Hudson Valley Outfitters’ Teri Barr made some requests, including one for 10 new planters donated by BOCES to be placed along Main Street, at no cost to the village and with a member’s personal garage space promised for storage during the offseason. Other requests involved sectioning off areas for educational activities run by Stonecrop Gardens and Glynwood Farm, as well as permission to conduct a bike decoration parade through lower Cold Spring.

Mike Halpin was present to discuss another event for bikes, but of the motor variety. He had requested use of Dockside Park for a June 29 fundraiser for St. Jude’s Children’s Research Hospital. Halpin said that a group of about 30 to 40 motorcycle enthusiasts plan to ride from the Palisades Mall to Cold Spring, where there would be music, food and motorcycle equipment for sale. Halpin assured the board that most of the bikers are just regular guys who love to ride, many of them in law enforcement, and that they would be happy to “throttle down” as they enter the village, if required.

Campbell said that Cold Spring Police Officer-in-Charge George Kane had reservations about requiring 10 officers for an event so close to another big one, the 4th of July. Halpin mentioned he had considered holding the event at Mayor’s Park, across from his house. That sounded more feasible to the board, because it might require fewer officers to control traffic there.

Trustee Matt Francisco reported that he spoke with the law firm of Daniels, Porco and Lusardi, who agreed to lower their original bill of $14,000 to $9,000 for consulting the Historic District Review Board on the demolition of the Butterfield Hospital last year. The board voted to approve payment of the lower amount.