County Legislature moves to have Putnam take the lead

“I am proud to be in the company of greatness,” declared Odell as she reminded listeners that last week commemorated the 40th anniversary of the bittersweet withdrawal from what was then South Vietnam. Three legislators, veterans all, Roger Gross, Sam Oliverio and Richard Othmer, legislative chair, joined Odell for the reading of the proclamation. 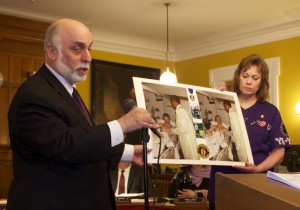 The ceremonial tribute was meant to underscore the significance of the honor “wanted by none, respected by all,” according to Dennis Castelli, county historian, purple heart recipient and a driving force behind the effort for the recognition. Castelli said there are numerous Purple Heart recipients in Putnam County.

The most poignant aspect of the evening’s theme came later in the meeting when Castelli presented Maryanne Curtin, the mother of Lance Cpl. John G. Curtin, USMC. Maryanne held up a picture of her son in a Washington, D.C., hospital receiving special visitor President Obama. John Curtin sustained wounds in Afghanistan resulting in the amputation of both his legs below the knee.

Maryanne thanked the legislature and the veteran’s groups for all the support for her son and asked that he and others not be forgotten. She said John was looking forward to additional rehabilitation and employment.