Putnam County Executive MaryEllen Odell moved stage center into the issue of safety planning for the Indian Point nuclear power plant by vetoing a county Legislature resolution that called for an extension of the designated evacuation zone for the controversial energy producer.

The legislative resolution, passed by a 7-2 vote at a meeting on April 3, called for a formal extension of Indian Point’s evacuation zone from 10 miles to 50 miles. The 2011 radioactive disaster at the Fukushima, Japan, nuclear plants served as the underlying basis for the resolution’s concern that Indian Point represents greater risks than heretofore recognized. An extension of the evacuation zone and therefore the required evacuation planning raises many questions about practicality, costs and ultimately the efficacy of operating the plant beyond its current licensing date —  especially  given the proximity of Indian Point to New York City. 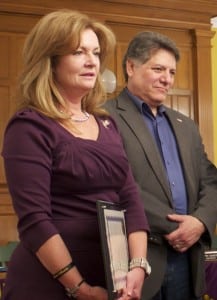 Sam Oliverio, county legislator for Putnam Valley, which along with Philipstown has large sections within the current 10-mile zone, said in a statement to resolution supporters that he will seek to override Odell’s veto, for which he would need six of the seven original “yes” votes. But he expressed reservations over his ability to muster them and called for a show of public support at a meeting of his Health, Social, Education and Environmental Committee at the Historic Court House in Carmel on May 14 at 6:30 p.m. Barbara Scuccimarra, legislator for Philipstown, voted for the resolution and serves on Oliverio’s health committee .

“Outrage hardly begins to describe my reaction” to the veto, wrote Steve Laifer, one of several local activists who worked to get the resolution passed, in an email to supporters. “This demonstrates the power of New Orleans-based Entergy Corp. to overrule the people who live in Putnam County.”

Neither the resolution nor Odell’s veto directly affects planning for the plant, as it is under the jurisdiction of the federal Nuclear Regulatory Commission (NRC). But an official position by the county government that the current evacuation zone is insufficient for public safety would add yet another point of contention to the current consideration by the NRC of the licensing status of the two plants at Indian Point. The county is responsible for coordinating evacuation plans with the NRC and Entergy Corp., Indian Point’s owner.

In her veto message Odell called for a reconsideration of the resolution with assured participation of Entergy and other stakeholders “to address the alleged deficiencies in the resolution.” Odell acknowledged that while participation had been possible in the original consideration of the resolution, she believed a greater effort was needed to develop facts and educate the public.  She was particularly pointed in repeatedly describing the legislative action as a “template resolution” developed by Riverkeeper, a Hudson River advocacy group and aggressive critic of Indian Point’s impact on the river and regional environment.

The matter of appropriate evacuation planning is hardly just a local or regional matter. Recently the General Accountability Office, the investigative arm of Congress, issued a study questioning the safety of the 10-mile standard. Among its concerns is the effect of people outside the zone “self-evacuating” and potentially causing chaos on roads, impeding the ordered and planned evacuation from the 10-mile zone. The NRC issued a statement affirming its commitment to a 10-mile zone and its belief that evacuations can be conducted safely and effectively.