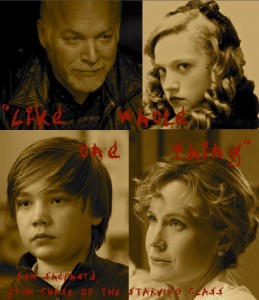 World’s End Theater will present the latest offering in their Modern Classics Reading series, Sam Shepard’s Curse of the Starving Class, on Friday, April 19, at 8 p.m. at the Philipstown.info space, 69 Main St., Cold Spring. Tickets are free on a first-come, first-seated basis.

“Curse is about America, the most aspirational, most tragic, most beautiful and most conflicted country in the world,” said Plummer, “and it’s one of the most honest things ever written about what it means to be in a family. It’ll make you laugh, it’ll make you think and it’ll kick you in the gut. Metaphorically. It’s just a reading, so there won’t be any actual gut-kicking.”