Cristina Fontanelli will appear in concert on Sunday, April 21, at 4 p.m. in the Chapel Restoration. The program will include selections from her opera, Broadway, cabaret and nightclub repertoire. Admission is free. 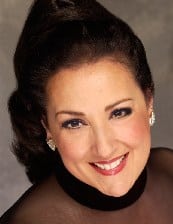 Among broadcast appearances, Fontanelli was PBS host for Andrea Bocelli’s 2011 concert in Central Park and has been on CBS Weekend NY in performance and as a co-host for the past two years. She has sung with the Palm Beach Opera, the Cairo Opera, Opera of Hong Kong, the New York Grand Opera, New Jersey State Opera and the Opera of the Hamptons. She has also been guest artist with the Boston Pops and the St. Louis Symphony performing in major concert halls throughout the United States, including the Lincoln and Kennedy centers, and in Canada and the Far East. She has toured the Middle East extensively as an Ambassador of Opera, has recorded Cristina Fontanelli Sings Great Italian Favorites, has appeared at Feinstein’s at The Regency in New York City, among other venues, and has received various other awards.

Robert Wilson, who will appear with Fontanelli, has a distinguished career as both soloist and accompanist.

The chapel, at 45 Market St. in Cold Spring, is across from Metro-North station, where free parking is available on weekends. This concert is made possible, in part, by New York State Council on the Arts with the support of Gov. Andrew Cuomo and the state Legislature and public funds from Putnam County, grants managed and monitored by Putnam Arts Council. Contributions from the public are welcome.