Cold Spring to separate from Farmers Market due to liability issues

A project to upgrade Cold Spring’s wastewater treatment plant may get a green light soon in order to correct code violations and to address safety and energy efficiency issues.

The Board of Trustees heard a presentation given by engineering consultants from Fuss & O’Neill and Oakwood Environmental, as well as Cold Spring’s Water and Wastewater Superintendent Greg Phillips, on Tuesday night (April 16). This led the board to consider undertaking the project in one phase rather than in two or three separate phases, as had been suggested previously to help with financing of the project. 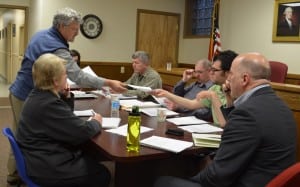 Following flooding during storms, however, the village discovered life-safety issues that needed to be addressed as well. The electrical switches and generators, for instance, must be moved outside and above ground where they will not be susceptible to flooding, along with a new standby generator that could provide power to the entire plant. These would be placed in a new building, about the size of a small garage, elsewhere on the site.

Because of the high cost estimated for the project, around $1.45 million, the previous board had thought to separate it into two phases, with the life-safety issues addressed first and the aeration system later, so that they could be financed separately. After discussion, however, the board realized that they might not save much money, since the two phases would not be separated by much time, and because the savings from a high-efficiency aeration system could offset any costs they were hoping to avoid by splitting the project up.

Farmers Market to be dropped

A village discussion with the New York Conference of Mayors (NYCOM) yielded some bad news for the Cold Spring Farmers Market, for whom the village holds an account. NYCOM advised that the village stop administering the account for the Farmers Market, because there are no controls in place for handling the cash.

Mayor Ralph Falloon said, “It is NYCOM’s belief that that is considered a gift of services, and we have no controls over the way they do business and their money and cash.” Because the village is not present when the Farmers Market collects money, “it’s a huge liability issue.”

Trustee Stephanie Hawkins asked whether anything could be done to keep the market operating with the village. Falloon explained: “First problem is, they’re not even in the village, so that doesn’t make it easier. The village would have to be running the Farmers Market, with village employees. NYCOM’s recommendation was for them to start their own 501(c)(3) not-for-profit organization and handle their own business.”

The process of becoming a nonprofit would likely take too long to be feasible as an immediate solution, especially since the village is inclined to end the arrangement as soon as possible. Barney Molloy, recently appointed member of the Zoning Board of Appeals and slated to move to the Planning Board, commented that the market might be able to get help from Boscobel, where the market will soon move for its outdoor season.

Falloon expressed willingness to work with the market. “We’ll gladly assist them in getting on their own feet, whatever that entails.”

On Thursday, Hawkins reiterated the Village Board’s support of the market “to ensure their continued operation” and their desire to help them “find the next step in their growth and development.” Both the village and the Farmers Market promised to issue statements of the state of affairs.

The board revisited the issue of searching for a new lawyer to replace current Village Attorney Stephen Gaba of the firm Drake, Loeb, Heller, Kennedy, Gogerty, Gaba and Rodd. Last fall, the previous board had voted to search for a new lawyer due to controversy over Gaba’s and former Mayor Seth Gallagher’s interpretation of the Historic District chapter of the Village Code. 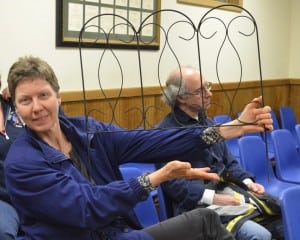 Sue Peehl holds up a section of fencing she proposes to go around tree beds on Main Street, which could cost $500-1,000, depending on the number of beds to be fenced. Photo by J. Tao

Hawkins has spearheaded the effort to search for a replacement at recent meetings, and the board concluded Tuesday that she will work with Trustees Chuck Hustis and Matt Francisco to gather a list of law firms to research and interview. They are slated to present that list at their next meeting (April 23), but since the agendas of upcoming meetings are long, they may not be able to get to it then.

Falloon expressed reluctance to conduct the search right away, since Gaba has been representing the village in two major engagements — the Butterfield development and a conflict over the shed at 14 Stone St. “I don’t know that it’s in our best interest to switch,” he said. “I don’t have a problem with Drake Loeb continuing till we get those done.”

Francisco agreed that it would not be beneficial to the village to change lawyers midstream for those two major projects, but Hawkins stressed that another attorney could be engaged for all other business. “There are other projects that we’re going to be starting,” she said. “If we’re going to start new stuff, then that will become the new Butterfield or the new shed.”

Molloy commented that the village would not need to continue engaging Gaba for the Butterfield project beyond passage of the zoning change. “You’re about to adopt the formula business regulations, so that’s one thing in the hopper, and then this B4A zoning — if you get those two components in place, with that revised Butterfield timeline that you were talking about, then you’re back to square 1,” he said. “Then you could probably go through the board review process with a new attorney once you get those projects done.”

Sue Peehl, who is involved with the contested shed, added her own comment about Gaba: “From the shed perspective, it’s the lawyer who got the village into this mess.”

Trustee Bruce Campbell reported that Officer-in-Charge George Kane was more amenable to a motorcycle fundraising event for St. Jude’s Children’s Research Hospital held at Mayor’s Park rather than at Dockside Park in Cold Spring, because it would require fewer police officers to direct traffic when the estimated 40-65 bikers enter the village and to patrol during the event.

Kane expressed interest in engaging two additional officers for a first shift and two for a later shift, in addition to the regular officer on duty for each shift. The board voted to approve the application for the public event, set to take place 10 a.m. – 9 p.m. on June 29.