Non-native plants and animals can be destructive

More than 80 local residents got together last Saturday, April 13, to discuss alien invaders. The invaders are not bug-eyed creatures from outer space, but rather non-native plants and animals that can destroy biodiversity, damage the economy and pose threats to human health. The Community Forum on Invasive Species was hosted by the Hudson Highlands Land Trust (HHLT) at the Highlands Country Club in Garrison. It featured a panel of 10 experts from several organizations, including Cornwall’s Black Rock Forest Consortium, Open Space Institute (OSI), Audubon’s Constitution Marsh, New York State Parks, New York Partnership for Regional Invasive Species Management (PRISM), and Cornell Cooperative Extension. 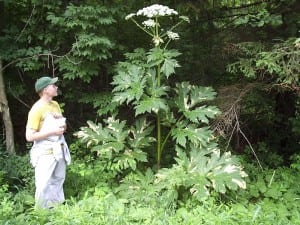 Giant hogweed can grow up to 14 feet in height and its sap can cause serious injury to people.

Exotic, or non-native, species pose problems locally and around the world. In a natural ecosystem such as a marsh, woodland or lake, plants and animals are sustained as part of a complex, interdependent network. When exotic species are introduced, it can seriously damage that network.

A high profile example of that was the infestation of zebra mussels in all five of the Great lakes in the late 1980s. A Russian freighter released the mussels into the lakes and, with no natural predators, they thrived, consuming so much of the food relied upon by other species that native wildlife began to decline. It is a problem that costs Great Lakes states, provinces and communities billions of dollars. Zebra mussels have since spread to the Mississippi, Tennessee, Ohio and HudsonRiver basins.

Panelist Paul Elconin, OSI stewardship coordinator, highlighted a program that organization is initiating in partnership with Scenic Hudson to control black swallow-wort, a toxic plant of no known benefit to local wildlife. The project will also educate landowners about the plant’s drawbacks, including its ability to crowd out native species and to harm bird and butterfly populations. In Garrison, black swallow-wort is found in fields along Route 9D from Route 403 south to Old Manitou Road. Populations are patchy but, if left unmanaged, control will be difficult and ultimately will also negatively impact aesthetics, agriculture and recreation.

Elconin also singled out bamboo. “It is becoming a problem in Garrison,” he said, adding that many people plant it as a screen. It can get out of control quickly. “You have to cut it back, cut it back and cut it back some more,” he said. Unchecked, it can become a monoculture and “nothing will grow underneath it.”

Decker and HHLT colleague Kathy Hamel put giant hogweed near the top of their list of unwanted invasive species taking root in Philipstown. “It’s worse than poison ivy. It makes people photo-sensitive,” Hamel said. This plant, a perennial herb in the carrot family, can do serious harm to people. The New York Department of Environmental Conservation website states, “Its sap can cause severe skin and eye irritation, painful blistering, permanent scarring and blindness.” Giant hogweed is hard to miss. It can grow to more than 14 feet tall and has stems up to 4 inches in diameter, leaves up to 5 feet wide and a flower that is up 2½ feet in diameter. 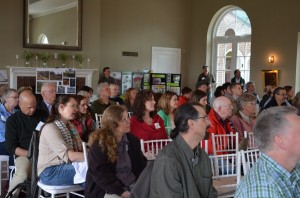 Constitution Marsh Director Eric Lind described efforts to control phragmites, an exotic reed, and put the problem of invasive species in context. “We often develop a negative, gut reaction to exotic species, assume they are ‘bad’ and that something needs to be done. On the other hand, mute swans and brown trout are often perceived positively, but both are introduced species.” Lind said they focused on phragmite control at the marsh, because “we had good evidence it could impact specific marsh birds, and it was in an early enough stage of growth that we could do something about it.”

Lind also pointed to an exotic species found in the Hudson River in 2007 — the Chinese mitten crab. “Their impacts are unknown, but if their populations expand they may increase predation on native organisms, compete with blue crabs, and cause extensive erosion.” Lind said the crab, like the zebra mussel, was likely brought to North America in ballast water or by someone releasing captive animals, “underscoring the need for regulations that prohibit the distribution of potentially damaging exotic species.”

Hamel and Decker said there are a number of ways that residents can help reduce the impact of invasive species — initially by making themselves aware of the offending plants and not buying them. “They can also learn how to properly remove and dispose of plants,” Hamel said. PRISM offers training in its iMapInvasives program, an online mapping project that enables volunteers to use GPS coordinates to pinpoint the location of exotic species in the lower HudsonValley. An iMap workshop will be held at the Desmond-Fish Library in Garrison on May 29. For more information on invasive species, visit HHLT’s website, hhlt.org, and click on “After-Forum Resource Page.”