Laubrock and Rainey perform next Change of the Century jazz concert

On Friday, April 26 at 8 p.m., the Howland Cultural Center in Beacon will present the next concert in the monthly series Change of the Century — New Jazz for the 21st, featuring the wife-and-husband duo of saxophonist Ingrid Laubrock and drummer Tom Rainey. 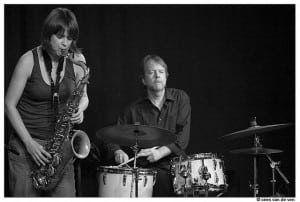 Originally from Germany, Laubrock lived in the U.K. and is now residing in Brooklyn. She has performed and recorded with Anthony Braxton, Dave Douglas, Kenny Wheeler, Tim Berne, Mark Helias, Michael Formanek, Mary Halvorson, Tyshawn Sorey, Evan Parker, Steve Beresford, John Edwards, Veryan Weston, Luc Ex, Django Bates’ Human Chain, Evan Parker, The Continuum Ensemble and others. As part of the F-ire Collective, she won the BBC Jazz Award for Innovation in 2004, was nominated for the BBC Jazz Award for “Rising Star” in 2005 and won a Fellowship in Jazz Composition by the Arts Foundation in 2006.

Admission for each concert in the series is $15, or $10 for students and seniors. Tickets will be available at the door each concert evening only. A Facebook group for the concert series has been created and can be viewed at www.facebook.com/groups/changeofthecentury. The Howland Cultural Center is located at 477 Main St. in Beacon and can be reached at 845-831-4988.