May 5 event to affect parking at start and finish lines 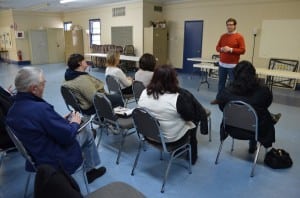 Putnam County Tourism held a forum on Tuesday, April 23, to inform residents of what to expect on the day of the Ridge Hill Putnam Cycling Classic (PCC), Sunday, May 5, especially how it will restrict traffic and parking. Organizer Ray Fusco said that they wanted to hold the residential forum to increase communication about the event, especially in light of complaints during the first PCC last October. Along with Putnam County Tourism Director Libby Pataki, other event organizers and members of the press, only a few residents attended the forum at the VFW Hall.

Because of new information received Monday about an event at Our Lady of Loretto Catholic Church — a virtual pilgrimage to Lourdes, France — on the same afternoon as the PCC, the route had to be changed, after recently being revised to avoid steel plates and roadwork for the water-main lining project. Instead of finishing on Fair Street at Cross Street (in front of Loretto), cyclists will finish on Fair Street near Mayor’s Park, just north of the wastewater treatement plant. 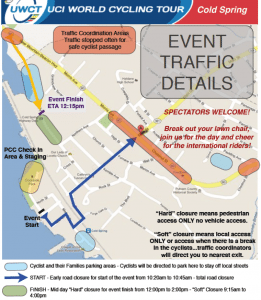 Cyclists will start in front of the bandstand on West Street at 10:30 a.m. There will be rolling street closures from 10:20 to 10:45 a.m. as the cyclists move out of the village, traversing West, New and Market Streets, crossing the railroad on Lunn Terrace, up the hill on Main Street and finally turning south on Route 9D.

Riders on both the shorter and longer courses will return to Cold Spring via Route 301/Main Street, turning left at Peekskill Road and right at Route 9D, crossing Main Street and making a sharp left onto Fair Street to the finish. The first of the cyclists on the shorter route are expected to return to the village between 12:15 and 12:30 p.m.; those on the longer route may begin to return around 1:30 p.m.

The finish will therefore require a “hard” closure of Fair Street from the finish to Northern Avenue from noon to 2 p.m., with no vehicles permitted. From 7 a.m. to noon and from 2 to 4 p.m., a “soft” closure will close that section of Fair Street, with traffic directors allowing only local access or during a break in cyclists.

Maps shown at the forum and available for download at putnamcycling.com show these closures as well as areas of Route 9D where traffic will be stopped frequently to allow passage of cyclists. The maps also indicate where cyclists and their families will be directed to park — in addition to the Metro-North parking lot by the station and by Mayor’s Park, the lot at Butterfield Hospital will be available and serviced by a shuttlebus and the trolley. 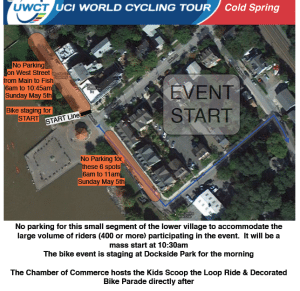 The Pedal Into Spring Festival will hold a kids’ parade on decorated bicycles as they “scoop the loop” on race day, riding from the bandstand up Main Street, making a loop on Market, North and West Streets. Kids can begin gathering near the bandstand after watching the start of the PCC or between 10:45 and 11:35 a.m. The start is at 11:45, with the loop roads closed between 11:40 and 11:55 a.m.

The sole stop in the U.S. on the UCI World Cycling Tour, Cold Spring will be host to an estimated total of 400 riders along with their families and friends. Currently, there are 227 riders registered from around the world, with 20-30 local riders signed up, including Philipstown Supervisor Richard Shea and former Cold Spring Mayor Seth Gallagher.