A loaf of olive bread caught my eye at the farmer’s market last week. It was a beauty, plump and golden, and I quickly came to feel that it was something I couldn’t live without. So I bought it.

But like many things that come into our lives borne on such wings, it soon turned into a responsibility: What was I going to do with it? It was quite large.

My usual solution, when I come home with too many loaves of fresh-baked bread, is to slice some of them up right away, arrange them neatly in waxed paper, put them in freezer bags, and stash them in the freezer. That way, I don’t need to thaw out a whole loaf before we can eat it; we can pull out a couple of slices at a time and toast them — light or dark, depending on their intended use — and they are nearly as good as if we’d eaten them that first day. 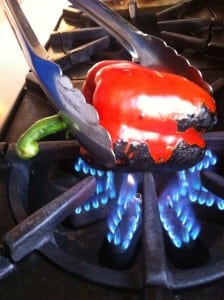 Sometimes I even make my kids’ lunch sandwiches right on frozen bread, figuring (wrongly, I’m sure) that the chill of the bread will help keep the meats and mayonnaise fresh a bit longer in that overheated school.

I went through various phases of bread storage before arriving at this one. For a while, after a smart chef friend told me that the only way to keep bread fresh was by wrapping it in foil, I did that religiously until I realized that aluminum foil is appallingly bad for human health and even more toxic for the environment. I’ve also been told that the only ONLY way to store bread is unwrapped, out on the counter — but the source of that tip was an obsessive-absolutist bread baker, so his advice had no relevance to my life.

Still, I thought of him last weekend as I left the olive loaf sitting naked on the counter, reluctant to put it away or even slice into its beautiful crown. Instead, I began puzzling over what to serve it with, hoping to come up with something delicious so that we’d devour the whole thing quickly, obviating the need for storage.

There was a problem, however. We didn’t have many groceries in the house: not peppers (roasted or otherwise) or goat cheese or rosemary or parsley or leftover lamb or roast chicken or eggplant or bitter greens or even capers or eggs. We did have canned tuna, but I was not in the mood for canned tuna. So my precious loaf of bread would require a trip to the store. Sigh. Off I went. 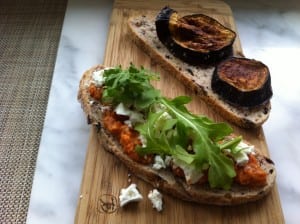 Back in the kitchen, I mixed up a red-pepper paste. It looked fairly awful, like baby vomit, but when I spread it on little squares of the olive bread, added some goat cheese and topped it with arugula, the combination tasted so good that George said, “Wow, Mommy, this is the most delicious appetizer in the whole universe,” (immediately prompting Peter and me to speculate that he was gunning to get quoted in this column; evidently it worked). Henry concurred in a less hyperbolic way: He came and stood by the cutting board so that he could eat every subsequent sample the moment I made it.

Dosi, meanwhile, did not so much as raise her eyes from her book. She dislikes any baked goods whatsoever with things in them unless those things are nuts or chocolate chips.

I didn’t force it. The boys are getting so big now that between the two of them and Peter they can polish off an awful lot of bread in a few hours, saving me the trouble of finding space in my freezer to store it, and leaving me free to go fall for another loaf.

This tastes good enough to serve open-face as a canapé to company, but it’s not very pretty, so I think it’s best reserved for a family lunch or light supper.

For the red pepper paste:

handful arugula, frisee, or other green

One thought on “Mouths to Feed: Loaf Story”