The Board of Trustees of the Village of Nelsonville worked on the 2013-2014 budget on Monday, April 22, to stay within the 2 percent tax cap mandated by the state. A public hearing on the tentative budget will be held at 6 p.m. on Monday, April 29. 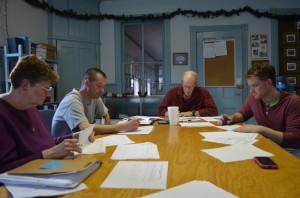 At their previous meeting on April 8, a preliminary draft budget showed a large increase in the amount to be raised by taxes — about a 57 percent change from the current year’s budget — reflecting the expenses of the major project to repair Healy Road.  The board anticipated that the road project would need to be split up into parts in order to stay within the tax cap, but this was still unknown as of Monday, since bids for the work would not be in until Friday.

Monday’s workshop saw the tax increase finally go down to 2.42 percent, which is within the 2 percent tax cap because of exempted expenses, after a few rounds of cuts and adjustments. The major cut, of course, was made to the street maintenance budget, which would fund the Healy Road project. Other funds cut included culture and recreation, community beautification, and trees, which all had lower-than-budgeted expenses in past years.

The trustees discussed starting earlier in the budget process next year, so that they could have enough time to pass an ordinance to override the tax cap, which would require a public hearing, and raise more funds should they be needed by a major project.