A Taste of the Valley, as the Haldane School Foundation’s (HSF) spring fundraising party at Glynwood was dubbed, could be a metaphor for what the HSF provides for the students at Haldane. The appetizers, spirits, side courses and desserts could be seen as the innovation grants for activities surrounding the main course that is the school curriculum itself. 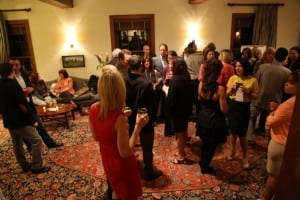 Guests mingled at the Haldane School Foundation’s A Taste of the Valley fundraiser.  Photo by Maggie Benmour

The soldout event, hosted by Glynwood for the second year in a row, drew a large crowd, which ribboned its way backwards and forwards through the warren of food-and-drink-filled rooms in Glynwood’s Main House. As if in a game of Clue, guests jumped from the library to the dining room and back again, through the hall lined with silent-auction items, but rather than rope and candlestick, they were seeking to sample such delicacies as peanut tofu bars from Nature’s Pantry, summer rolls from Sukhothai, sweet onion crepes with truffled fondue from Cathryn’s Tuscan Grill.

Riverview Restaurant was doing a roaring trade in ceviche tacos, while Angelina’s gourmet pizzas, Fresh Company’s tortillas españolas and a very large B&L Deli cheese platter were mysteriously and rapidly disappearing from the living room. Glynwood not only provided the venue but apple soup as well, and the “Little Haldane Chefs,” not to be outdone, came up with beet soup from their Farm to School program.

The monies raised from A Taste of the Valley will be used, as are all funds raised by the HSF to fund educational enrichment grants, for classroom technology, educational field trips, library upgrades and more. Since its inception in 2000, the HSF has awarded over $500,000 in educational grants to the Haldane district, with almost $70,000 awarded in 2012 alone. 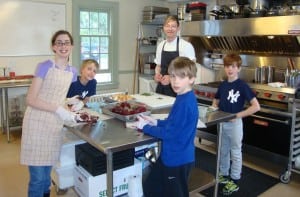 An “auction menu” handed out to guests described just a few of the many silent-auction items, which beckoned alluringly. Much thought had gone into grouping items together as a package, one example being a cooking class at the Culinary Institute of America grouped with a Cuisinart blender and a Crate & Barrel mixing set.

Many donated items reflected “a taste of” the talents that exemplify the group of people who come together as Haldane parents. For example, there were tickets to playwright Sharr White’s second play to open on Broadway this year, along with a backstage tour (and hotel and dinner thrown in to boot). There were also many takers hoping to be the lucky winner of the served-in-your-home, multi-course Indian dinner cooked by the Kapoor family.

Addressing the crowd, Glynwood Director of Development Jessica Winberry offered congratulations on a wonderful event. She said: “Much like the foundation gathers resources for students, Glynwood gathers resources for farmers and eaters across the Hudson Valley in our mission to strengthen the regional food system. More than a farm, Glynwood trains new farmers in business and agricultural management; grows new and emerging markets for regional products like hard cider and pasture raised meats; increases viability of farming in communities across the region; and trains chefs and other food service professionals to be stewards of the land through culinary arts. We hope you’ll visit again, for the sheep-shearing event on May 19, or to shop at our new farm store, or for a monthly farm dinner, or perhaps to pick up a weekly share of vegetables from our garden.” 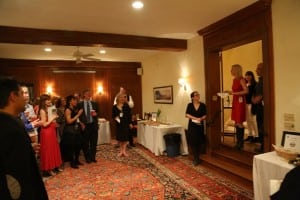 HSF President Jennifer Marrinan spoke next, thanking her fellow board members for putting together a successful evening and extending those thanks to all of the restaurants who donated generously. She then read from a letter of thanks sent by Haldane second-grade teacher Beth Satterlee, explaining to The Paper that she felt “parents need to hear from teachers and kids what a difference the foundation is making to understand the impact we have.”

Satterlee’s letter read: “I just wanted to thank the entire HSF for the SmartBoard that was installed in my room this year. The children and I just love having it. Lessons and learning are so much more fun and meaningful when they can be interactive. We also just had our new SmartBoard software installed this week, and thank you for those programs as well. We have had fun this week exploring the different games and activities. One of the kids even mentioned that ‘learning can be so fun!’ The nonfiction comprehension Plinko game is our favorite so far. Many, many thanks for your positive effect on my classroom this year. We are very grateful.”

One thought on “Many Sampled ‘A Taste of the Valley’”