The concept of a pedestrian path along the Hudson River between Cold Spring and Beacon took another small step forward last Saturday, April 27, when an ad hoc group gathered to get updates and outline goals. 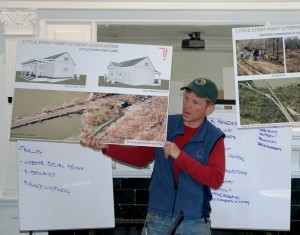 James Hartford displays his design for a shed for hikers at Little Stony Point, a stop on a planned ’Fjord Trail’ along the Hudson River. Photo by L.S. Armstrong

Known unofficially as the “Hudson Fjord Trail” or “Hudson River Hike-Bike Fjord Trail,” the path would parallel the river, Metro-North railroad tracks, and Route 9D, starting with a stretch between Cold Spring and Beacon. (Ultimately, it might extend south to the Bear Mountain Bridge, cross the Hudson, continue on the western side of the river to the Newburgh-Beacon bridge, and wind back through Beacon to Cold Spring.)

Since 2006, the trail has been pursued at the governmental and nonprofit level with growing momentum. Recent grants bring the amount available for preliminary work, such as drafting a master plan, to $26,000. Numerous difficulties remain, including finding a way to get hikers through or around the Breakneck highway tunnel. However, one potential problem, the need to acquire property from private owners, has apparently been averted. “We don’t see taking of anybody’s land, trespassing, or anything like that,” said Mark Wildonger, a professional planner with Scenic Hudson.

Michael McKee, chairperson of the Philipstown Greenway Committee, an offshoot of the Hudson River Valley Greenway (New York state partnership with towns and counties), said the trail idea evolved from concerns about pedestrians along Route 9D. On part of 9D, a narrow, two-lane, curving state highway, the speed limit is 55 miles per hour, although the road often teems with hikers using trailheads between Cold Spring and Beacon. One, Breakneck trail, is reportedly the most popular day-hiking destination in the country. With the trail, “the whole experience of the road will change from a sort of autobahn to a parkway” friendly to hikers, McKee said.

Participants took up numerous topics, including signage to direct visitors to hiking trails, use of the weekend trolley to reach trailheads, marketing, collaborating with local businesses, reducing the 9D speed limit, and parking, though no one seemed to want the latter overemphasized to the detriment of scenery and hiking. 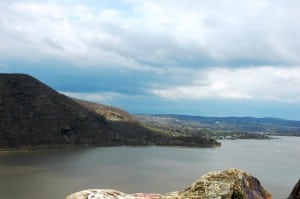 “It’s not about cars. It’s about people. It’s about walking,” said James Hartford, a Cold Spring architect who, on a pro bono basis, provided a design for a hiking shelter at Little Stony Point, a trail stop, and, with Little Stony Point caretaker John Teagle, is undertaking other improvements.

“Car-free is carefree — that’s what we want” to foster as an attitude, said Dar Williams, another Cold Spring resident.

Funding came up, too. Shea, a long-time trail advocate, asked rhetorically, “Where can people write checks to? It’s been a persistent issue.” He urged creation of a distinct entity, with “a group name and an account set up” to receive contributions.

The group then spent some time discussing a formal name for the trail and an official organization to support it. Describing the trail as “a great thing,” LaColla, the Fishkill supervisor, advised against a title that sounds too Philipstown-oriented. “What I’d hate to see is any kind of parochialism,” he said. The river constitutes “a natural resource that is a regional asset,” he added, noting that another potential attraction, a rebuilt incline railroad up Mount Beacon, would likely increase the area’s attractiveness.

Participants decided to meet again in June and to meanwhile dig into the various topics raised. Hartford also sought assistance with the Little Stony Point shed and related upgrading. “This is something you can all volunteer to do right now — help us with this,” he said.