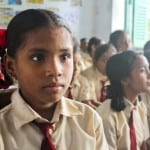 Ruksana, 10 years old, is one of the girls featured in the documentary ‘Girl Rising,’ showing at Downing Film Center in Newburgh May 4 and 6. Photo by Dyu D’Cunha/Ten Times Ten LLC

The Downing Film Center in Newburgh announces two screenings of Girl Rising, a unique documentary directed by Academy Award-nominee Richard E. Robbins, which spotlights the stories of nine girls born into unforgiving circumstances in nine different countries and captures their dreams, their voices and their remarkable lives. Narrated by Cate Blanchett, Meryl Streep, Selena Gomez, Salma Hayek, Alicia Keys, Liam Neeson and others, the movie is at the center of 10×10, a global campaign to educate and empower girls.

“By bringing Girl Rising to Newburgh, we are showing our community a beautiful, unique documentary film that demonstrates the impact education can have on girls’ lives around the globe,” said Brian Burke, director of the DowningFilmCenter. 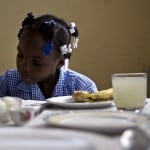 Wadley in a film still from the documentary ‘Girl Rising,’ showing at Downing Film Center in Newburgh May 4 and 6. Photo by Nicole Whitaker/Ten Times Ten LLC

Girl Rising premiered on March 7, the eve of International Women’s Day, and has since been screened at hundreds of theaters around the country.

A portion of Girl Rising ticket sales goes to support girls’ programs around the world through the 10×10 Fund for Girls’ Education. The fund is distributed to 10×10’s network of nonprofit partners who are working on the ground: A New Day Cambodia, CARE, Girl Up/United Nations Foundation, Partners in Health, Plan International USA, Room to Read, UNICEF and World Vision.