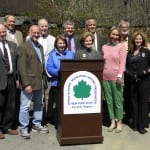 Clarence Fahnestock Memorial State Park’s Canopus Lake visitor and recreation area is in store for a major overhaul as renovation begins this month. The project is being funded through a public-private partnership led by the Office of Parks, Recreation and Historic Preservation, the Open Space Institute’s Alliance for New York State Parks program, the Taconic Regional Commission of Parks, Recreation and Historic Preservation and the Friends of Fahnestock and Hudson Highlands State Parks.

To date, $825,000 in public and private funding has been identified and raised toward a $1.2 million goal that will help improve and update run-down public facilities at the park’s swimming beach and Winter Park area, including the café space, ski and snowshoe rental area and restrooms.

Of the $825,000, half has been raised through private donations, while the remaining $400,000 was secured through a New York State Environmental Protection Fund grant awarded through Gov. Andrew Cuomo’s Hudson Valley Regional Economic Development Council.

The first project in this multi-phase initiative will remodel and winterize the public bathhouse and update the lifeguard facilities. Following completion of this initial phase, rehabilitation work will begin on the main courtyard, café space and winter recreation area. All facets of the project will improve energy and water efficiencies at the site. Additional plans for the park include naturalizing the swimming beach and the trails and pathways in the area, improving sustainability features, installing a fully accessible fishing pier and enhancing recreational and play opportunities at the park.

Less than an hour from New York City, Fahnestock State Park offers more than 14,000 acres of protected forests, lakes and streams. The park’s original 2,400 acres were donated in 1929 by Dr. Earnest Fahnestock as a memorial to his brother Clarence. Today, the park welcomes nearly 300,000 visitors a year.

Individuals or organizations interested in learning more about the project or making a donation are invited to visit osiny.org/DonateFahnestock.