One spring a few years back, I flew out to Iowa to write an article on a young woman farmer who had started an organic meat cooperative with her husband. Like many women, Wende Elliot had first become interested in food when she got pregnant, and the more she’d learned, the more alarmed she’d grown, until she felt compelled to do something substantial to create an alternative to the industrial food system. She and her husband bought a grand, tumbledown Victorian farmhouse that jutted up like a menhir from the vast, flat land, and began raising goats, chickens and sheep. Plus three kids. 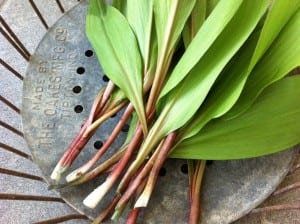 The endeavor could easily have antagonized their neighbors — farmers planting 3,000- to 4,000-acre fields of corn and soybeans and running CAFOs (confined animal feeding operations, those notoriously overcrowded feedlots) — but Wende was so sweet and brave and respectful that she got herself elected to the local farm bureau board instead. It didn’t hurt that she dressed like June Cleaver’s chic kid sister.

There are times when life suddenly feels condensed, as if every hour is packed with more ideas and events than a typical month. This trip was like that. I’m still often reminded of things I saw, heard, smelled and learned during the two and a half days I spent tooling around Iowa in Wende’s car, listening to Death Cab for Cutie between stops. I interviewed dozens of people, from a nurse who treated farm kids for various pesticide-induced cancers to a farmer who’d stopped fields from eroding by planting long-rooted grasses during the off season. Everything and everyone had a story to tell, and I published none of them, not one, because later that year, Wende and her husband got divorced and her business went belly-up and my editor nixed the whole project.

So my emotions get a bit cloudy when I recall that trip. Most of it, anyway. But not the ramps nor the lunch they were a part of. 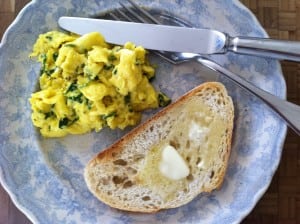 One day, we stopped in Ames, at a house owned by Wende’s friend Donna Prizgintas. Donna had been a chef and caterer in L.A. before moving back to Iowa, and we sat in her kitchen, whetting our appetites on pickles she’d put up the previous fall, while she cooked us a simple, astonishing meal. It starred, among other things, eggs from a neighbor’s hens, mint from her backyard, stoneground flour, and ramps she had foraged in the woods.

At that time, ramps (wild relatives of leeks and members of the allium family that I wrote about two weeks ago) had already become a culinary obsession in New York City. Every spring, foodies would rave about them in a way that was both tiresome to their friends and dangerous for the ramps, whose woodland beds were being decimated by overeager dealers who were pulling them up by the roots only to discover — too late — that it takes decades for them to grow back.

Donna had cut hers, wisely, at the stem. And she prepared them in a way that was so unexpectedly good that I decided then and there that I wanted to make this an annual meal in my house. What she did was this: she chopped them up fairly small, sautéed them in butter, then poured in whisked eggs. Just before the eggs were scrambled, she threw in a smattering of mint.

Mint and ramps and eggs sounds bizarre, but it was not.

Alongside, she served warm graham biscuits with butter and honey. The biscuits didn’t quite go with the eggs, but both were delicious, and the meal was a testament to how satisfying it is to consume food when you know where everything came from and how it was made.

And, in the end, that was really the point of the whole trip: Everything you put in your mouth has a backstory, and that story matters whether or not you ever hear it. Trace your food back to where it came from, and you’ll discover that what you eat is a powerful choice, because with every bite, you can nourish the farms, woods and pastures that nourish you. Or not.

Scrambled eggs with ramps and mint

For every 2-egg serving: