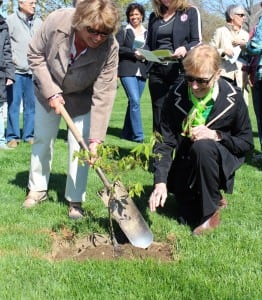 For Arbor Day the Philipstown Garden Club planted two American chestnut trees in Cold Spring on Chestnut Street, a street once lined with those grand trees. Most of the American chestnuts trees (which reached 100 feet high by 50 feet wide) in the East Coast were destroyed by blight.

“We have been working on the American chestnut tree project for five years,” said JoAnn Brown, PGC horticulture chair. “We planted small seedlings at Stonecrop and members’ homes until they were ready to be permanently planted. Today we are proud to give Chestnut Street back its namesake!”

The trees, part of PGC’s attempt to repopulate the area with chestnut trees, were planted on the grounds of The Nest in Cold Spring. The rest of the trees will be planted at Bannerman’s Island, Fishkill, the Garrison Institute, Garrison, and at Hubbard Lodge at Fahnestock Park.

The blight fungus brought in from eastern Asia was first found in only a few trees in the New York Zoological Garden in the late 1800s. The blight spread with a vengeance and in its wake left only dead and dying stems in what was a healthy forest. By the 1950s the American chestnut population tragically disappeared.

One thought on “Putting the Chestnut Back on Chestnut Street”