Cost of roadwork still unknown due to error on original bid

The Board of Trustees of the Village of Nelsonville voted to adopt the 2013-2014 budget after a public hearing, attended by two members of the public/press, on Monday, April 29.

No changes were made to the budget since the board’s last workshop on April 22. The tax increase from the current year’s budget is 2.42 percent, which stays within the state-mandated 2 percent tax cap because of exemptions in the budget calculation. This results in a projected tax rate of $5.63 per $1,000 of assessed value of property, up from the current rate of $5.50 per $1,000. 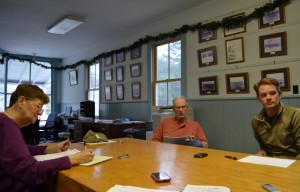 Substantial cuts had to be made at the last workshop, especially in the street maintenance budget that would cover the costs of long-planned repairs to Healy Road, in order to stay under the tax cap. The board said then that the project may have to be completed in part over the upcoming year, if their funds are not sufficient.

The costs of the project are still unknown, but Trustees Ande Merante and Will Duncan gave a rough estimate for drainage and patchwork — not including paving — at $300,000, a small part of which is covered by state funds. This cost even exceeds the amount allowed to be raised by taxes this year — about $258,000 — in order to stay within the tax cap.

Bids for the project were expected to be submitted to the village office by last Friday, April 26, but because of an error on the bid notice, which stated the deadline as “Monday, April 26,” a second bid was submitted on Monday, April 29, and the project had to be rebid due to the error. Bids will be known one week after the publication date of the new notice, anticipated as Wednesday, May 1.