In a back-and-forth session with some 80 senior citizens Thursday, May 2, Philipstown Supervisor Richard Shea promised a town-wide survey to gauge older residents’ needs, interests and preferences for services and possible venues for addressing them.

Joined by two Town Board colleagues, Councilors John Van Tassel and Nancy Montgomery, Shea met with members of the Senior Citizens of Philipstown at the Chestnut Ridge apartments. 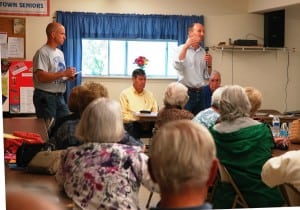 Along with creating a survey to answer those questions, Shea said the Town Board would immediately try to establish an exercise class for seniors — a popular request — and continue exploring possible development of the American Legion hall on Cedar Street into a multi-use facility. The town government does not own the legion property and has been informally negotiating with veterans. The Parish Hall at St. Mary’s Episcopal Church also came up as another potential program space.

Given the uncertainty over the fate of the proposed Butterfield Hospital redevelopment project, long seen as a place for a senior citizen-community center, Shea has been looking at other spaces not only for senior citizens’ needs but those of the town government, now crammed into the 146-year-old Town Hall.

Shea also emphasized the need to work with Putnam County and emphasized that while considering the best place for the lunch program, “the Town of Philipstown is not going to take over the nutrition center.”

Joe Immorlica argued that the church site not be used for the lunch program. Putting it at St. Mary’s “is going to hurt the American Legion,” he said. Also, it would cost rent money, he added. “If we move to St. Mary’s, that’s going to be a burden on the taxpayers.”

Overall, “we’re just looking at options and ideas” for addressing various senior concerns, Shea said. “This is the beginning. We want to get more engaged with seniors to move this forward. Just talking and talking isn’t getting anybody anywhere.”

In show of hands votes, the seniors backed the idea of centralizing programs in one place and expressed favor for the American Legion.

Montgomery noted the current range of sites. Now “there are things in town and they aren’t fully utilized by seniors,” she said. “I’d love to help the town move this along and see what seniors really need” and find the best place to meet them.