One is a re-creation of a 1930s soda fountain, the other an ice cream parlor 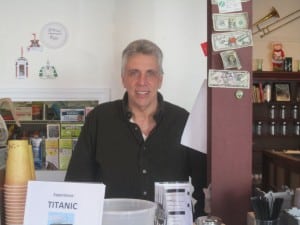 Ron Iarossi behind the counter at the Beacon Creamery.

Ron Iarossi is one of those small business owners who keeps getting new ideas about things he loves — things like ice cream, soda fountains and Christmas ornaments. In a tale out of a Frank Capra movie, 20-something years ago, Iarossi was toiling for a bank in Connecticut that went under. Layoffs everywhere were rampant. Instead of sinking into a hole, he went into research mode, fueled by his love of ornaments, and took the retail plunge, opening up Kringle’s Christmas House in Fishkill.

Needing to expand, the Hudson Valley native went to check out Beacon, where larger spaces were available. He made the move and opened there 18 years ago, selling ornaments year-round in two large rooms on Main Street.

About six years ago, Iarossi and his son-in-law, Scott Zolotas, were asked by Mountain Tops Outdoors clothing retailers Katy and Buddy Behney to join them in opening a business at the far western end of Beacon’s Main Street after a mutual landlord suggested it.

“It just fell into place,” said Iarossi of the ice cream shop, adding that the great location, Hudson River view and patio sealed the deal. Using Jane’s Ice Cream was Iarossi’s idea; he had tasted it years ago. “Once you taste it, you’re going to want it, hands down, no comparison,” he said. 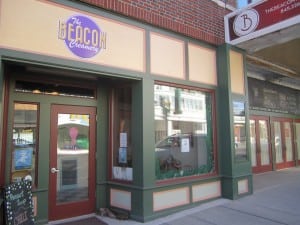 Beacon Creamery is located next door to the Beacon Theatre.

Jane’s comes up with some flavors specifically for Beacon Creamery. These have included “nirvana banana” and “coffee and cookies.” Jane’s also tests out new flavors at the shop — last year lavender was an unexpected big seller. (The top sellers are cappuccino, killer chocolate, coconut almond joy and good old vanilla.) They will be expanding from 24 to 36 flavors (including sorbets) this year. They will open on weekends from April onwards and all week long beginning Memorial Day weekend.

When running three businesses (including the Bank Square Coffeehouse) proved to be too much for the Behneys, Iarossi and Zolotas bought them out. There was no trepidation for Iarossi about going into business with an about-to-be family member: “He’s such a nice guy — he’s one of my closest friends.” The ice cream store now alternates with Kringle’s Christmas House — the economy taking a toll on operating each of these businesses year-round.

Iarossi and Zolotas’ newest venture also took hold in almost a happenstance way. A couple years ago, Iarossi ran into Jim Brady, managing director of The Beacon Theatre, who showed him around the then-unrestored space. “We climbed over some concrete and there was practically nothing there,” said Iarossi. “We’d like to put a soda fountain in there” was enough to jumpstart Iarossi into business No. 3.

Zolotas, a landscaper by trade and extremely handy, according to his father-in-law, built everything and put the floors down. They worked together on its 1930s soda fountain look, complete with black-and-white patterned floor and even what appears to be a player piano hoisted onto a platform behind the counter. (It’s not, but it is rigged so that ragtime tunes and the like appear to be emanating from it — all part of the ’30s flavor.)

This Beacon Creamery is less an ice cream parlor than a soda fountain with nods to the present, seen in its range of espresso, cappuccino and lattes, and to the past, with the spotlight on malted, shakes, floats and egg creams. A specialty is the “two-tone shake,” made with one type of ice cream on top of another. Light lunches are offered, with daily soups during winter and quiches and salads in spring. Baked goods, all homemade, include brownies, muffins, strudels, pies, cookies and “Scott’s phenomenal cheesecake,” according to Iarossi. 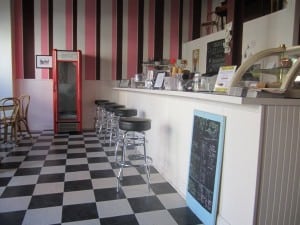 The interior of Beacon Creamery, evoking a 1930s soda fountain.

This Beacon Creamery, about to celebrate its first birthday, sees most of its business in the evenings. Packed after performances next door, where they serve as the concession for the theater, and on Second Saturdays, it’s a place where people can head for just a dessert after dining nearby. They also host birthday parties in conjunction with the theater. The kids have lunch at the creamery, head next door to see a movie and return afterwards for ice cream, cupcakes or cake.

They also host theme nights — for a recent Titanic night, together with a screening of the movie next door, they reproduced the desserts served to first-class passengers. Last summer they held Wednesday happy hour nights with 25-cent root beers. They also participate in community events and are planning something special for Beacon’s upcoming bicentennial parade.

The Beacon Creamery soda fountain is located at 445 Main St., and hours are from noon, sometimes a bit earlier, to 8 p.m. on Tuesdays through Thursdays; to 9 p.m. on Fridays and “10 or later” on Saturdays; they are closed on Mondays. For more information, visit their Facebook page or phone 845-765-0444.