The buildings that house the First Presbyterian Church of Philiptown in Cold Spring may lie tucked away from major roads at 10 Academy St., but its presence is nevertheless felt throughout the town and beyond. Home to the area’s food bank, Community Nursery School and monthly Jazz Vespers, the church offers opportunities for community, spiritual growth and outreach. 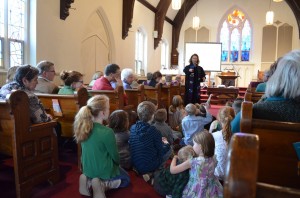 The church melds structures and styles from the distant as well as the more recent past, reflecting a synthesis of old and new that permeates several other aspects of the church. For example, their website describes Sunday worship as “a combination of traditional and modern, with hymns and more modern music, choir and instrumentalists, piano and organ, dance and drama.” As if to demonstrate that conglomeration of styles, at a recent Sunday service, Music Director Tom McCoy played both classic and modern hymns on the piano, improvised through parts of the service, and ended with a keyboard piece by J.S. Bach.

The congregation first met in 1828 above the pattern shop of the West Point Foundry and later at the Union Church on Market Street, which also housed other denominations until they could build their own churches. The original building of the Presbyterian Church was completed in 1868, with an addition for Sunday School built in 1888. The Social Hall was finally added, complete with kitchen, offices and renovations to the older buildings, in 1968 — 100 years after they first occupied the original building.

The Presbyterian Church proper traces its roots to the 16th-century Protestant Reformation and writings of French/Swiss theologian John Calvin. From Switzerland, Calvinist and other Reformed teachings spread to Scotland, England, Holland and France. The Presbyterian Church was formed in America by Presbyterians mostly from Scotland and Ireland, with the first presbytery (a group of congregations) organized in Philadelphia in 1706. 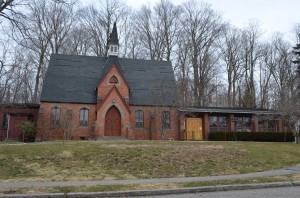 The Presbyterian Church (U.S.A.), or PC(USA), of which First Presbyterian is a member congregation, is the largest Presbyterian denomination in the U.S. and grew out of a series of mergers (and divisions) culminating in 1983.

The aspects that make the Presbyterian Church distinct from other Protestant denominations, according to the PC(USA) website (pcusa.org), are its organizational structure and its emphasis on Reformed theology.

The Greek word presbuteros, meaning “elder,” points to the important role played by church elders in their government. Ruling elders are laypersons elected by a congregation, while teaching elders, or ministers, are ordained by a presbytery; both make up a “session,” which governs the congregation. Several presbyteries make up a synod, and the General Assembly governs the entire denomination.

Calvinism stresses the sovereignty of God in all things, which notably includes a belief in God’s election of some for salvation from damnation, regardless of their own actions. Other themes of Reformed theology include the shunning of ostentation, idolatry and tyranny, in favor of “the transformation of society by seeking justice and living in obedience to the Word of God,” according to the PC(USA).

The Rev. Leslie Mott, First Presbyterian’s pastor, and her congregation focus on Christ’s “healing the sick and binding up the brokenhearted, eating with outcasts, forgiving sinners” (from the Presbyterian “Brief Statement of Faith”). First Presbyterian’s website comments on balancing belief and action: “We wrestle with how our Reformed beliefs intersect with the issues of our lives, and we reflect on putting the grace of God into action in our neighborhoods and in the world.” The latter explains their participation in many programs to help those in need. 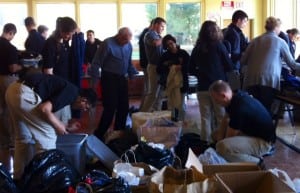 The Philipstown Food Pantry stands as First Presbyterian’s most well-known mission. Created over 30 years ago, the food bank collects and distributes food for families in need of assistance every Saturday morning from 9 to 10 a.m. In order to provide healthy, fresh produce to the families who come to the food pantry, First Presbyterian began the “Inspiration Garden” on their front lawn in 2010.

When Hurricane Sandy hit New York and New Jersey last fall, First Presbyterian like other organizations collected items for donation, but they have continued to help with recovery months later. The church “adopted” a mother and two children who had lost everything in the storm, collecting and donating furniture, money and whatever else they needed to help them get back on their feet.

Church members also volunteer for Habitat for Humanity, a nonprofit ecumenical organization that builds and repairs houses, which families in need can purchase through no-profit, no-interest mortgage loans. Volunteers go on certain Saturdays, usually from around 7 a.m. to 1 p.m., to Newburgh’s Habitat for Humanity, doing construction and other work.

On Saturday night, April 27, departing at 10:30 p.m. and returning around 4 a.m., a crew from First Presbyterian made one of its twice-a-year “Midnight Runs” to New York City, bringing food, toiletries, clothes and companionship to the homeless. The Midnight Run (midnightrun.org) is a volunteer organization that coordinates these runs, with different churches, schools and other organizations signing up for individual runs throughout the week. This spring, members of the confirmation class went on the run, and a group of 25 West Point cadets helped with preparations.

Mott explained: “The most important thing that we do is to stop and have conversation … because the homeless are essentially invisible. I’ve heard fascinating stories, and I’ve found unbelievably brave people. I mean, there is mental illness, sure, but there is also a community there that is very real and present, so we go to be part of that and to show people that they’re not forgotten.” 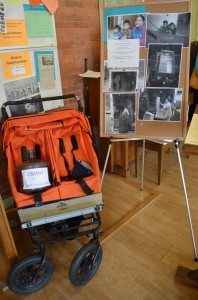 A poster in First Presbyterian’s hall depicts their project to help a mother and her two children dislocated by Hurricane Sandy; a stroller recently acquired for the family is displayed alongside. (Photo by J. Tao)

When asked if it was difficult to learn what these people are going through, she said, “It is heartbreaking, but it’s also an incredibly joyous experience for them and for us.”

Church of the Open Door

First Presbyterian is also known as “The Church of the Open Door.” Many members mention the welcoming tone of the church, its pastor and its congregation as part of why they love the church. One member said he joined 15 years ago because of its “open-minded, progressive theology.” Cathy Carnevale of Cold Spring, who joined in the past year, said she was drawn to the music and to Mott’s sermons, which are “not steeped in dogma.”

Carolyn Llewellyn, who helps with Sunday School most Sunday mornings, explained what she likes about the church: “They clearly did some activism, and the music drew me in absolutely, right away. I love Leslie, too. It was a mix of all those things — the congregation, the music.”

She praised Mott as a spiritual leader, but added that the congregation is also active. “I find Leslie to be very thought-provoking and very inspirational, and not just her,” she said. “They have parishioner-led bible study, they have people from the congregation giving a sermon.”

Being a mother of small children, Llewellyn also appreciates the strong presence of youth in the church. She said she “liked the mix of ages,” which made it “very alive.”

Along with their Sunday worship at 10:30 a.m., the church also offers other kinds of practices, such as meditative walking of their labyrinth. The bible study group on Sunday from 9 to 10 a.m. and Wednesday morning contemplative prayer from 7 to 8 a.m. are practices that attract some members who may not even attend the regular Sunday service. Jazz Vespers occurs at 5:30 p.m. on the third Saturday of every month from September through May.

The outreach programs mentioned here are by no means an exhaustive list; there are many other activities, including mission trips to Nicaragua, that the church engages in. For more information, visit presbychurchcoldspring.org, email [email protected] or call 845-265-3220.