At the old folks home in Sleepy Hollow where my parents live, most meals are served cafeteria-style, with a help-yourself salad bar and a dessert table set up near the hot-foods line. Whenever my family goes to visit, the kids load up their trays like frenzied seagulls, the freedom of choice overwhelming their budding rational faculties. 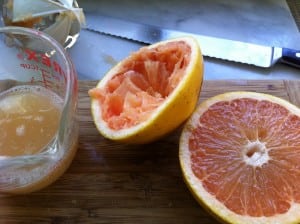 My father, despite his 91 years, is no more restrained. In fact, he usually puts them to shame. Last Sunday, while they worked their way through waffles, omelets, bacon and sausage, he sat down to a tray filled with French toast, cookies, churros, scones, egg salad, pickled beets and a peculiar ice cream float he’d composed himself of cranberry juice topped with two scoops of cappuccino crunch ice cream.

Most of it made me laugh: My father long ago cut some deal with the gods of body fat and arteriosclerosis that allows him to gorge on cookies and cake without paying the consequences.

But the beverage irritated me. Irrationally so. The idiosyncrasies of our parents can do that to us, even — perhaps especially — when they reach an age when we should be summoning up our deepest wells of tolerance towards them.

The thing is, I grew up wincing at his deranged food combinations. For years, he drank Coke mixed with Tang every night at suppertime. At lunch, he dipped peanut butter and jelly sandwiches in cream of mushroom soup. More recently, when my younger sister made a remarkable Burmese chicken stew, he poured prune juice into his portion to cool it down.

And one day, when I was in sixth grade and my mother was in graduate school, he was put in charge of preparing school lunches for my sisters and me. He made us American cheese and jelly sandwiches. We were old enough to be not just grossed out but also socially mortified, and begged our mother never to leave him with that task again. 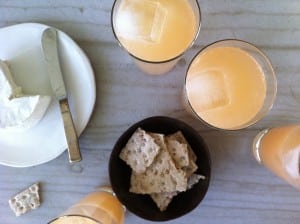 Lately, I’ve been reading about “super tasters” — people whose palates are so sensitive that, to them, flavors the rest of us would find mildly unpleasant are intolerable, and those we’d find enjoyable, exhilarating. Something like 15 percent of the population of the United States qualifies. Another 15 percent are at the other end; called “non-tasters,” they barely register with their noses and tongues what goes into their mouths. The rest of us are somewhere in the middle.

When I started working in the food world, I met people who took great pride in their educated palates. A meal at a restaurant could turn into a subtle game of one-upmanship as everyone vied to identify the almost imperceptible ingredients in one another’s appetizers and entrees. For awhile, I went along with it, but in the back of my mind there was always this small fear that I was secretly like my dad: completely numb to flavor, a non-taster. Eventually I had to admit that the evidence did not support this theory. But still there are times when I’m at work developing or adapting a recipe when the bottom seems to drop out of my confidence, and I think: Is this actually delicious, or am I completely deluded?

Last weekend, some friends came for dinner, and, inspired by the weather, I made a pitcher of cocktails. The combination of fresh grapefruit juice, prosecco, elderflower liqueur and gin tasted to me just like spring: sweet and floral, with a bracing note of bitterness. But just to be sure it wasn’t some boozy version of a cranberry-cappuccino-crunch float, I gave Peter a taste before our friends arrived.

I’m sure it’s true what the psychologists say: that the traits we dislike most in others are those we fear most in ourselves. I’m also sure that the next time we head down to Sleepy Hollow, tucking a jar of this delectable cocktail into my bag could help me view my dad’s concoctions — fruit salad mixed with tuna, anyone? — as expressions of his own radical culinary genius.

The recipe evolved from one I read about in passing in The New York Times last year. The combination stuck in my head, though when I looked it up again, I realized I’d altered the recipe quite a bit. Warwick gin works especially nicely here.

Combine all the ingredients in a pitcher or glass and stir. Serve at once.