Last weekend, during the Cold Spring Area Chamber of Commerce’s festival Pedal Into Spring and Putnam County Tourism’s Putnam Cycling Classic, Philipstown.info conducted a sidewalk survey, interviewing more than 100 parties. While not scientific, the results provide insight into the people who visited Cold Spring, what they liked best about the weekend and what suggestions they had for improvements. Selected at random, visitors were interviewed in equal numbers on Saturday and Sunday. The survey dealt with visitor origin, awareness of weekend events prior to arrival, how visitors knew about the festivities, other reasons for visiting, mode of transportation, anticipated spending levels and more.

How many visitors came because of the weekend’s events?

While factors such as the beautiful weather and previous visits played a role in people’s decisions to come to Cold Spring, the weekend’s special events were also a major factor. In Sunday’s survey, when visitors were asked if they were here specifically because of the bike race, 40 percent responded “yes.” Combined results for both days showed that 43 percent of visitors knew about the events when planning their weekend.

From far and wide – and close to home

The largest block of visitors hailed from New York City, about 28 percent of those surveyed. Putnam County residents, including Cold Springers, came in a close second at 25 percent. Of those surveyed, Dutchess and Westchester County residents represented 12 and 11 percent respectively. International travelers and New Jersey residents accounted for about five percent of visitors. Most of those from foreign countries, including England, Australia, Brazil, Bhutan and Slovenia, were visiting New York City and came to Cold Spring as a side trip. Orange and Rockland County residents made up 4 and 2 percent of those interviewed respectively. Other points of origin included Ulster County, Connecticut, Virginia, Texas, California and Massachusetts.

Getting the word out 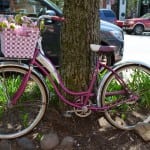 Publicity is a top priority for any special event. Memory can be faulty, and some visitors had no recollection as to how they first heard about Pedal Into Spring or the cycling event. Others, however, remembered clearly. Local newspapers were identified by 34 percent of respondents when asked how they learned of the weekend events. Papers identified included The Paper, The Journal News, Times Herald-Record and The Putnam County News and Recorder.

“Word of mouth” is often referred to as the most desirable form of advertising, and the weekend fared well in that regard — with 24 percent of those interviewed saying that they heard about the events from friends or family. Eighteen percent became aware of the weekend through signs and posters, while 12 said they learned of it through email and the Internet. The remaining 12 percent was divided among Putnam County Tourism, magazines, mailings and advertising.

It’s official. We are still very much an auto-centric society — 77 percent of visitors surveyed came to Cold Spring by car, 18 percent sat back and enjoyed a train ride, 4 percent took in some fresh air to get here via motorcycle, and 2 percent, the most local of local visitors, got to Main Street on foot. Daytrippers made up the overwhelming majority of visitors, as 92 percent said they were here just for the day. Seven percent stayed overnight in a local bed and breakfast or nearby hotel, while campers made up only 2 percent of respondents.

How deep were their pockets?

What else brought visitors to Cold Spring?

Those who didn’t know about the two special events were asked what brought them here. “Out for a day trip” was the big winner with 44 percent saying that’s why they came. Eighteen percent said they visit the area somewhat regularly, and 14 percent were here to hike. Six percent came to visit friends or family. Restaurants, antiques and retreats each tallied 4 percent. Weddings and camping accounted for about 2 percent each. 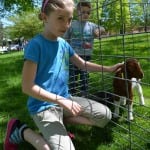 Children enjoy petting farm animals during Pedal Into Spring May 4, including mini horses from the Therapeutic Equestrian Center and this kid from Glynwood Farms. Photo by Jeanne Tao

Visitors were asked what they liked most about being in Cold Spring for Pedal Into Spring and its Main Street activities. No categories were suggested, but preferences clearly emerged — live music, antiques, outdoor vendors and the friendly, small village atmosphere collectively accounted for 52 percent of all responses. Village architecture, shops, food and beverages, riverfront views and the weekend’s variety of activities accounted for another 20 percent of people’s favorites. The petting zoo, storytelling, hula-hoop demonstrations and the well-organized nature of events were cited by a total 16 percent of those surveyed. Other things people mentioned included art galleries, flowers, kids’ crafts and educational booths.

Maybe it’s a positive comment on the human condition — visitors were much quicker to list what they liked about the weekend compared to listing what they’d like to see improved. Twenty-six percent of those asked said they could not think of anything that would have made the weekend better. Twelve percent suggested having more sidewalk vendors with a greater variety of wares, and about 11 percent said that they had expected to see more flowers. Five percent complained about parking, but by Cold Spring standards, that is hardly a groundswell.

Four comments combined to make up 8 percent of all responses: concern over the temporary water pipes along the streets; the need for more local overnight accommodations; support for a larger petting zoo and a suggestion to once again close Main Street to vehicles. Numerous one-time suggestions were made, ranging from adding more activities for younger children, more public restrooms and offering beer “to go” in plastic cups to having bike rentals available, providing transportation for hikers and including a farmers’ market in the weekend festivities.