Three of Garrison School’s newer and most active educators — physical education teacher Patrick Beckley, guidance counselor Michael Williams and art teacher Coulter Young — were granted tenure by the Board of Education Wednesday night (May 8) after the public hearing on the proposed 2013-14 budget. 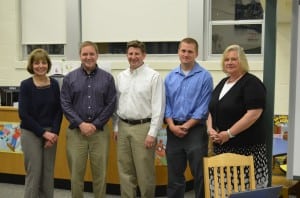 In a meeting attended mostly by some of the school’s teachers, who were celebrating the tenure decisions, Superintendent Gloria Colucci presented information on the budget, which the board had adopted at its April 3 meeting. Although the district has been facing greater challenges of dwindling government aid amidst increasing expenditures to satisfy government mandates, the Garrison School administration has proposed a budget that stays below the state-mandated 2 percent tax cap while also maintaining its programs without any cuts.

The projected tax rate increase is 2.18 percent, which is below the maximum allowable increase of 3.94 percent. (This is not exactly 2 percent because of exemptions in the budget.) There is an estimated tax rate of $19.42 per $1,000 of assessed value in Philipstown, up $0.42 from the current $19 per $1,000. (The rate is only an estimate at this time because property assessment values will not be known until August.)

If voters on the election May 21 reject the proposed budget, the district may present the same or modified budget for a second vote. If that were to fail, however, the district would have to adopt a contingent budget with a 0 percent increase from the current year’s budget, resulting in cuts of $179,062.

Important dates in the budget process are voter registration during school hours May 6-10 and the budget vote on May 21. The budget is available to the public on its website, gufs.org.

The election of School Board members will also take place May 21. The Garrison School PTA will hold a “Meet the Candidates Night” on May 15. Board member Charlotte Rowe is running for re-election, while two newcomers, Julia Wynn and Derek DuBois, are looking to join the board.

Colucci recommended the three teachers for tenure, who all joined the school in the fall of 2010. Beckley, who has become the school’s athletic director and is a three-season coach, earned his bachelor’s degree from the University of Buffalo and his master’s from Manhattanville College. Williams, also the school’s Dignity Act coordinator, earned his bachelor’s degree in theater from SUNY-New Paltz and his master’s in school guidance and counseling from the College of New Rochelle. Young, who has strengthened the school’s connection to the Garrison Art Center, has worked as a professional artist, with an associate’s degree in visual arts from Green Mountain College, his bachelor’s in art from SUNY-Buffalo, and a master’s in art education from Manhattanville College. He also teaches the health class in the middle school.