Local Audubon chapter teams identify as many species as possible

Early the morning of Saturday, May 11, bird-watchers from the Putnam Highlands Audubon Society (PHAS) awoke to begin their annual birdathon, a fundraiser that the group holds every May (and which other Audubon chapters organize around the country during the height of the spring migration season). Over a 24-hour period, teams of birders try to identify as many bird species as possible, collecting a pledged amount from sponsors for each species identified. 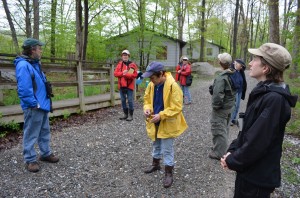 Audubon naturalist Pete Salmansohn, left, leads the beginner birdathon on a trail at the Taconic Outdoor Education Center May 11, identifying the typical call of the confused birder: ’What the heck is that?’

While some of the expert birders set out as early as 4 a.m., a smaller group of about seven novice birdwatchers, led by PHAS President Connie Mayer-Bakall and naturalist Pete Salmansohn, participated in a beginner birdathon at the Taconic Outdoor Education Center (TOEC) in Fahnestock State Park, from 7 to 10 a.m.

Equipped with binoculars and field guides, the group quickly discovered that the heavy cloud cover and new spring foliage would impede much of the bird-watching, the lack of sunshine making it difficult to see the colors of feathers.

The birders had to rely much more on Salmansohn’s mental repository of bird songs and calls to identify many of the birds they heard that morning, though flight patterns, silhouettes and patient searching of the tree branches would sometimes help them to identify some of them visually.

In the parking lot of the TOEC, one of the first birds sighted was the red-bellied woodpecker, whose undulating flight pattern, vertical perch and flash of bright red on its nape (and not, as its name suggests, on its belly) clearly identified itself even before making its characteristic chirring call or territorial drumming.

From the trails around the TOEC, birds requiring mostly visual cues for identification were the turkey vultures, which soar with wings in a V-shape — rather than straight out like a hawk; gulls, with their characteristic silhouettes; a pair of broad-winged hawks, which Salmansohn said were too large to be Cooper’s hawks; a great blue heron flying overhead; and the brown streaks of the house finch’s sides (compared to the more evenly red-feathered purple finch). 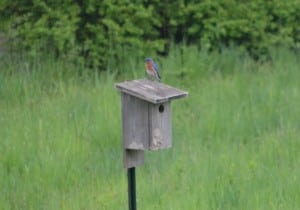 Bluebird seen on the beginner birdathon May 11

Birds identified solely by their sounds included the omnipresent brown-capped chickadee, which makes a distinct two-note whistle often heard in this area; the mourning dove with its slow coowha, cooo, coo, coooo; the tufted titmouse, which says, “Peter – Peter – Peter”; the Carolina wren with its loud “liberty – liberty – liberty – whew”; and the Eastern towhee, whose calls of “Drink your teeeeeea!” were heard throughout an area of Indian Brook Road near the ATT field (so called for the AT&T signal tower located nearby) owned by Open Space Institute, where the beginner birdathon ended.

Of note that morning was the many flocks of blue jays flying overhead, with their cries of “Thief! Thief!” and splayed tail feathers against the sky. Salmansohn noted it was unusual to see such a great number of them. In the meadow of the ATT field, the group spied a pair of Eastern bluebirds around a nest box, the male holding a large brown grub in its beak, probably to feed its chicks in the nest but reluctant to enter while being so closely observed. After the group moved away, the mother entered, while the bright blue and brown male stood watch atop the box.

Normally, many species of warblers traveling from the south, some wintering as far as South America, would be noted in this area at this time, but their small size and restless hopping about also made it difficult in adverse weather to identify many of them. Some of those noted that morning were the yellow-rumped warbler, the common yellowthroat, the black-and-white warbler and the blue-winged warbler. 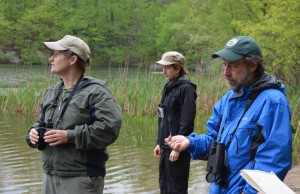 Altogether, the beginners’ group identified around 34 species on their walk (not including others seen by individual members outside of the walk), thanks to the more advanced birders helping them.

The four teams on the official birdathon met on Tuesday, May 14, to compile the species they saw on Saturday. They traveled an area stretching from the Long Island seashore to the parks of Dutchess County to the north on that day, some of them repeatedly caught in spells of pouring rain as well as thunder and lightning.

After a lengthy inventory over pizza, the grand totals were announced: The Bog Trotters won, having identified 121 different species, and all teams combined (including the beginners) succeeded in identifying 179 species, a considerable number taking into account the adverse weather conditions.

PHAS plans to offer more beginner bird-watching outings during the spring migration. It will hold a nature walk at Watergrass Sanctuary on Saturday, May 18, at 9 a.m. The program is free to the public and will be approximately 1.5 hours of moderate walking. The sanctuary is located along Route 9 in Philipstown, on the northbound side, near Oak Hollow Road (on the southbound side) between the Garrison Golf Club and The Bird and Bottle Inn. Attendees should park along Route 9 (southbound) across from the Watergrass Sanctuary signage.