The new documentary film Girl Rising links the stories of nine girls, each from a different country and each oppressed to varying degrees, and joins them together to advocate for the critical importance of educating girls.

Linking of a smaller scale took place locally to bring the Empower film series to fruition, when a teacher decided to include a book that inspired one of her students, leading the student to the film, resulting in a community effort to bring the film here. The entire chain was forged together to form something greater: a film series on human rights and making a difference in the world. The series got off to a rousing start Friday night (May 10) as filmgoers filled the Saint Basil Academy gym to watch the debut screening. 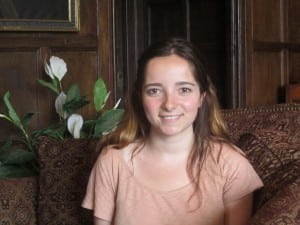 Samantha Kapsas (Photo by A. Rooney)

It began with Haldane senior Samantha Kapsas’ reaction to the book Sold by Patricia McCormick, which tells the story of a 13-year-old Nepalese girl sold by her impoverished family into what they think will be maid service but in reality is a prostitution service in India. The book was chosen by Haldane English teacher Kelly McAvoy, who designed the 12th-grade curriculum “to show how authors use language and literature to promote social norms or reveal injustices.”

McAvoy explained: “Sold was selected for two reasons: Its form is high interest — the book is written in vignettes that present themes and present the reader with more questions than answers. It is the last class text we read because it clearly identifies a specific injustice (human trafficking in India/Nepal) that allows entry points to many issues: commodification of people, police corruption and poverty in the developing world. It also links to issues in our society: devaluation of women and results of human greed/desperation. This text functions to model literature as an argument for social change and to (hopefully) lead students to question the results of power structures.”

Sold resonated deeply with Kapsas, a resident of Saint Basil’s, the Garrison Greek Orthodox Archdiocese home for children in need. Kapsas said Sold “has some correlation as to what I’ve experienced. Everyday life [in the book] is shocking to us. A girl gets sent away from her family, from country to country, trafficked. She struggled but overcame her weaknesses there.”

Upon hearing that the new film Girl Rising, similar thematically to Sold, would be screened in Rockland County, McAvoy offered students the opportunity for extra credit if they saw the film.

Kapsas was interested — in fact she was interested in “Ms. McAvoy’s entire lesson plan revolving around girls in Third World countries, hidden to us” — in bringing the film to Philipstown and turned to Saint Basil’s senior clinician, Cold Spring’s Rebecca Pearsall. Seeing the profound effect that Girl Rising had on Kapsas, Pearsall came up with the notion of bringing it across the river and using it as the launch for a film series they have dubbed Empower. 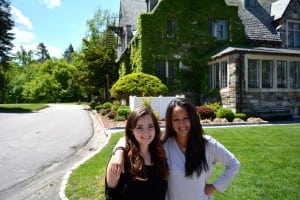 Pearsall said the series is “modeled after who Samantha is: an 18-year-old who understands that the world is tough. She’s had hard experiences, but she’s taken the opportunities given to her; she has an amazing heart.”

Kapsas in turn was “shocked” by the notion of starting a film festival. “I didn’t expect it,” she said. “It was awesome.”

Everyone at Saint Basil’s and Haldane was eager to join the cause. Pearsall called the Saint Basil’s administration “great — very supportive of all of this.” Kapsas approached Haldane High School Principal Brian Alm with the idea, and she said his reaction was “awesome — he was super excited — the happiest I’ve ever seen a principal be.”

Alm in turn called the film series “a great opportunity for both Haldane and Saint Basil’s Academy.” He continued, “This will serve to further improve our relationship with the local community as well as empower students to take initiative and raise awareness of global issues.”

McAvoy, also eager to support the project, said, “Sam’s passion is remarkable, and she deserves recognition because this project is truly hers.”

The screening was publicized through posters Kapsas put up all over town, a Facebook page and overtures made to local Girl Scout troops and other community organizations. On the day prior to the screening, Kapsas was hoping that her friends “will be more interested in it — I hope it changes their perspective on things.” Coming to Philipstown from outside of this area, Kapsas acknowledged that Cold Spring “is a bubble, but there’s no negativity attached to that; a tight-knit community is a good thing. Often people ‘don’t want to know’ [about global issues] but I hope they’ll come here and see the film and come to know it more, and also come to know Saint Basil’s.”

With a screen and sound system provided by Ballantine Productions, the original idea was to present Girl Rising outside on the vast Saint Basil’s lawn. Mother Nature didn’t cooperate, but the on-again, off-again rain didn’t stop the large crowd of close to 100 from filling the indoor gym.

Pearsall and Kapsas introduced the film, Pearsall calling Kapsas “the reason for tonight. She is extraordinary — one of the most wonderful people I’ve ever met.” Kapsas, after calling Girl Rising “the first of many films I hope will raise public awareness of human rights,” described Saint Basil’s as “a home for children, a safe haven, a place to have a better life.”

The audience, which included quite a few teenage girls (as well as boys and adults of both genders), watched the film with great concentration.

Kapsas’ personal favorite of the nine segments, coincidentally also set in Nepal, is one in which a young girl was sent out to be an indentured maid, changing households through the years, until efforts on her behalf by a persistent advocate for change altered her situation. “When she got out of it,” said Kapsas, “she brought together a bunch of other girls and organized them, which is really great.”

Comments on the series’ Facebook page after the screening indicated that the goals were reached and echoed those of Girl Rising’s producers, who stated, “Girl Rising is the centerpiece of our global campaign, and these organizers are the foundation. Together, they are driving transformative change one community at a time.” A sampling of those comments:

“The three 10-year-olds who came with me all said afterward how appreciative they are of their own opportunities and how they plan to stay in school so they can be successful and one day have money and skills that they can share with other girls around the world to help them, too. One said she wanted to open a school in Africa. Now all the sons and fathers need to see the film, too!”

“Thank you for including the Scouts…. Heard some positive comments on the way out … think it will give them something to think about, and someday hopefully be able to do something about!!”

“Thanks for giving my daughter a different perspective. So glad that we went.”

Kapsas is currently finishing up her senior year at Haldane with an internship, working with the middle and high school art teacher. She intends to pursue art as recreation but plans on studying psychology as her vocation. As for future films, Kapsas said the Empower series will not just be about one thing, but that it will happen “spontaneously — there will be other worldwide issues to spread.”