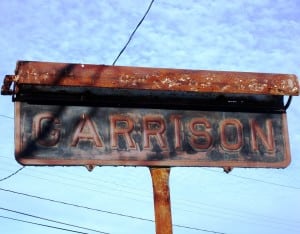 The sign stood alone and neglected before its restoration. Photo courtesy Barbara and Thomas Scuccimarra

A once-derelict sign along the Metro-North tracks at the Garrison train station shone in refurbished glory Thursday, May 16, after its unveiling by District 1 Legislator Barbara Scuccimarra and Robert Bickford, the Putnam County representative to the Metropolitan Transit Authority (MTA) board, which oversees Metro-North.

The sign, simply bearing the name “Garrison,” initially stood on the west side of the tracks, between the old depot (now the Depot Theatre) and the former Guinan’s pub. Now the sign graces a brick wall below the pedestrian elevator on the east side of the tracks.

Scuccimarra noticed the sign’s continued deterioration last winter and wrote to Metro-North President Howard Permut proposing that the railroad “restore it to its former state to again welcome the public to our community that we are all so very proud of.” Metro-North agreed, sent the sign to the railroad structures shop at Croton-Harmon for a thorough facelift and brought it back to Garrison for official installation on a glorious spring morning. 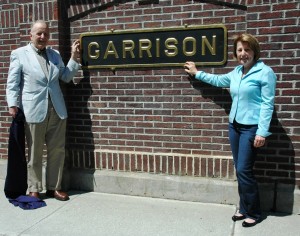 “Due to their efforts, a piece of history has been saved,” Scuccimarra said Thursday.

In a news release announcing the sign’s debut, Metro-North noted that it has added three trains each weekday, two on Saturday and one on Sunday, serving the Garrison train station, which about 400 riders use daily, Monday through Friday.