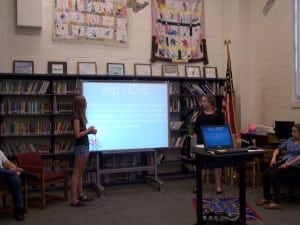 On Thursday, May 9, the Garrison School celebrated Differences Day, a day where students in grades K-8 participated in activities developed to educate students about Attention Deficit Hyperactivity Disorder (ADHD), a disorder characterized by a problem with inattentiveness, overactivity, impulsivity or a combination of the above.

Leading up to Differences Day, Garrison eighth-graders developed presentations about ADHD. Three teams — Emma Parks and Lila Osborn, Amanda Erickson and Anna Northup, and Paul Walker and Xanni Vourliotis — were selected to present their research to fifth- and sixth-grade students. The presentations taught students about the symptoms and challenges of ADHD as well as some of the solutions for the disorder. Fifth- and sixth-graders then created posters based upon what they learned during the eighth-grade presentations and used them to decorated the lunchroom.

The remaining eighth-graders and all of the seventh-graders split up into groups of four and read children’s books about ADHD to students in grades K-4. After reading the books, the seventh- and eighth-graders gave students a very simple maze to complete. Next students were given a complicated maze with lots of “distractions” on the page that most had difficulty finishing in the same allotted time. The second maze clearly demonstrated how distractions might impact a student with ADHD while trying to complete a task.

“We want kids to know that it’s OK to be a different kind of learner,” explained Garrison School Guidance Counselor Michael Williams. “Having the older students teach the younger students drove home the message in a profound way.”

Garrison School Principal Stephanie Impellittiere agreed. “We considered several learning disabilities for Differences Day but we decided to focus on ADHD because it is so common,” said Impellittiere. “Focusing on ADHD helped students understand that we all learn differently.”

Students also received a visit from Isaiah Walker, a Think Different Diplomat from Eye to Eye who spoke to Garrison School fifth- through eighth-graders. Walker is a recent graduate of Columbia University who has struggled with ADHD and dyslexia throughout his life.

Differences Day culminated with several students, parents and teachers participating in a 5K walk around the school to raise funds for local charity, Guiding Eyes/Heeling Autism in recognition of their work helping children who have learning differences. The walk raised over $800 to support the charity.