Altina, a feature-length documentary by New York-based filmmaker Peter Sanders, was awarded the David A. Stein Memorial Award for Best Director and Best Documentary at the 2013 Toronto Jewish Film Festival. The award was presented after the film’s Canadian première at Innis Town Hall on April 14.

In the announcement posted by the festival on March 27 (TJFF.com), this documentary is characterized in the following terms: “You may not have heard the name of Altina Schinasi, but after seeing Peter Sanders’ documentary, you will never forget her. From her birth into a wealthy Jewish family from Turkey and her school days, to her development as a sexually liberated artist and her political activism, this documentary tells the story of a woman ahead of her time. We also see how Altina’s fascinating life intersected with key movements and icons of 20th-century American history.” 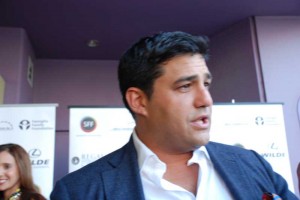 The film’s second screening on April 15, at the Cineplex Odeon Sheppard Cinemas in Toronto, was followed by Altina’s 1960 Oscar-nominated Interregnum, a documentary she co-directed with then-husband Charles Carey. Rarely screened, this short showcases the anti-Nazi work that artist George Grosz produced in Germany between the two world wars.

Presently a resident of Cold Spring, Peter Sanders holds a master’s degree in broadcast journalism from New York University and an undergraduate degree in history from the University of Vermont. His feature-length film, The Disappeared (2008), about the “Dirty War” in Argentina, aired on all three History Channel networks, showed in 40 countries, screened in numerous international film festivals, and was awarded a special prize for best documentary by the 2007 Documentary and Fiction Festival of Hollywood. His professional journey follows in the steps of a distinguished family of filmmakers that includes his father, Denis Sanders, the recipient of two Oscars.

Capturing the indomitable spirit of his serendipitous paternal grandmother, Altina Schinasi, was a special challenge he shared with his sister, New York-based literary agent Victoria Sanders and her spouse, Diane Dickensheid, the project’s executive producers.