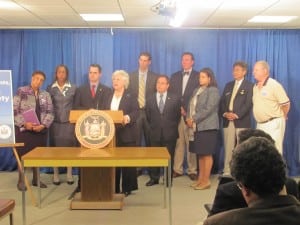 The bill (A.3471/S.1639) requires all mechanically propelled vessel operators to obtain a boating safety certificate by completing an eight-hour safe boating course. The requirement would be implemented through a multiyear phase-in beginning in 2014 with 18-year-olds. This legislation would help eliminate the dangers of boating often attributed to inexperience by requiring boat operators to take a course and become aware of all safety and legal aspects of operating a boat.

The lack of boating safety requirements in New York has led to higher fatality rates in recent years most commonly due to carelessness and operators’ ignorance, with many of these accidents involving the use of alcohol. Because the high dangers of alcohol on the road have translated onto New York waterways, operators should consider water navigation safety as seriously as traffic laws on the road.

A prank gone wrong last summer involved a boat operator who drove away while Ossining resident Bryan Johnson, 26, had temporary left the boat to go swimming, leaving him stranded and helpless. The incident received widespread coverage over the apparent drowning that ensued.

There were 243 boating accidents in 2010, with Long Island being the site of the largest number of accidents. The five counties of New York City had 13 accidents, and three accidents happened in Rockland County, all of them on the Hudson River.