There are about 80 plants sitting on my patio waiting on me to release them from their confinement and give them a place to grow. The cinnamon ferns, tired of waiting, already unfolded their fronds out of a plastic bag on top of the unused wood-burning stove. Every day I move a dozen tomato plants outside to bask in the sun and then back inside at night. Since tomatoes like warmer temperatures than we’ve had, it looks like I’ll have to keep this up for another week.

Two spirea bushes that I bought at a deep discount last October have been sitting in their pots for about three seasons now. I have a good excuse, at least. I had to wait for the guy with the backhoe to clear the Japanese barberry from behind the garage. The guy with the backhoe works on his own schedule, not mine or the spirea’s. The patch was too big and too thorny for me to get in there and rip it out by the roots on my own.

The herbs — cilantro, basil, dill — need to go into pots on the patio. I’m trying to dissuade the chipmunks from using my patio containers as mini racetracks again this year. Unless I figure out a plan to keep them out, I’ll wake up some morning to find the herbs dug up by the chippies. Last year I couldn’t get a single sunflower to grow, thanks to them. Here’s the advice I’ve gotten on how to deal with them: shoot them, sprinkle cinnamon in the dirt, sprinkle garlic powder in the dirt, trap them, and drive them more than 10 miles away before releasing them (which is illegal, by the way) or cover the pots with chicken wire (ugly).

The rock wall surrounding the patio is an ideal place for chipmunks to hang out. The bird feeder gives them a steady supply of sunflower seeds. It’s a wonderful habitat for chipmunks. I can’t see trading a sunflower for a chipmunk life so killing them isn’t an option. Once the spice and seasoning experiment has run its course, I’ll share the results. And plant the herbs. 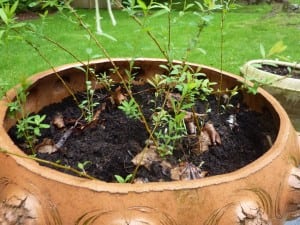 The rest of the waiting plants are flowers and seedling shrubs gathered at plant sales. Used bookstores were once my weakness — now it’s plant sales. The fantasy brought on by a plant label or book jacket is irresistible. I’ve been creating the aster on the south side of the house that will be the finishing touch. This pink bee balm will complement the echinacea beautifully.

An idea forms inspired by the stubby 2-inch plant — not even a hint of a blossom yet. As I watch it grow and unfurl its beauty, the joy I’ll feel will make the chore of planting it worthwhile. Seduced by the promise, even though I already have 72 plants waiting to find their perfect spot in the yard, No. 73 comes home with me, too.

This same narrative inspired me to realize that the foxglove could be moved to the bed in front of the kitchen, leaving a space next to the rose of Sharon that can be filled in with the aster. The hydrangea dwarfs the space next to the steps and if I moved that to the east side of the garage, I’d have the perfect sunny spot for this joe pye weed that will attract butterflies and be lovely to watch outside the front window. On and on it goes.

Every year I think that I’ve set up the landscape with everything it needs and won’t have to work so hard in the spring, yet here I am with more things to plant than there is time in a weekend. Throw in the stacks of books I’ve discovered at used bookstores, most recently a copy of Moby Dick (which I hate to admit I’ve never read), and there isn’t much time left for anything else. If I had discipline, of course, that would be a problem. But some days the plants remain unplanted, the pages unturned and life goes on. Without our dreams and visions, what fun could we have?